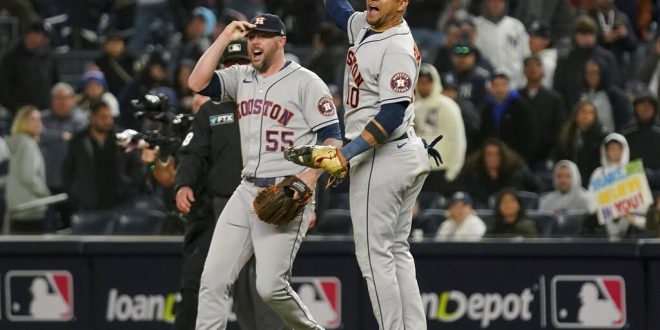 The Houston Astros complete the sweep of the New York Yankees in the American League Championship Series and now advance to the World Series to face the Philadelphia Phillies.

The Astros have done nothing but dominate this whole season. That goes for the regular season and in the playoffs.  After back-to-back sweeps in the ALDS and in the ALCS, the Astros are closing in on its first World Series trophy since 2017.

Justin Verlander on the mound, combined with Yuli Gurriel and Alex Bregman at the plate, has set this team apart from its competition.

Game four was an exciting one to watch. The Yankees jumped out to a quick 3-0 lead after two innings. Giancarlo Stanton, Gleyber Torres and Anthony Rizzo were the ones that got the scoring started. They drove in three runs on a pair of singles and a double by Rizzo.

Jeremy Pena did not let that Yankee lead last very long as he scorched an off-speed pitch over the left field wall.

Yuli Gurriel added an RBI single later in the inning to give the Astros a 4-3 lead.  Rizzo, who had a fantastic day at the plate, continued to produce as he drove in the tying run in the bottom of the fourth inning.

A couple innings later former Gator Harrison Bader wanted a part of the action as he hit a moon shot home run off of Hector Neris to put the Yankees on top.

The bottom of the seventh is where the Astros battled back again. Alex Bregman and Yordan Alvarez came up clutch with back-to-back singles that put the Yankees away.

Bryan Abreu, Rafael Montero and Ryan Pressly came in relief the last three innings for Houston and kept the Yankees at bay to give the Astros the win.  And how fitting was it that the man that led New York this whole season was the one that sent them home as well. Aaron Judge grounded out to first on the last play of the game to end the season for the Yankees.

For the 4th time in the last 6 years, we have won the American League Pennant! pic.twitter.com/lVFBJmHSkS

The Astros will now play for the World Series title for the fourth time in seven seasons.  They will have to go up against a scorching hot Philadelphia Phillies team led by Bryce Harper and Kyle Schwarber.

The Astros’ final series of the regular season was against the Phillies where they won two of three games.

The World Series will start on Friday, October 28th.