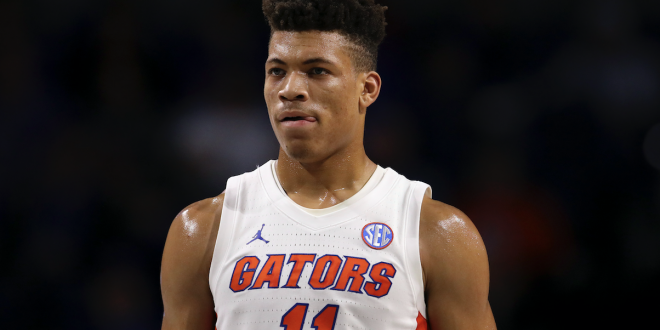 The status of Keyonate Johnson takes positive turn. According to his parents, Nika and Marrecus, Johnson is in stable condition today.

He was breathing on his own, and he was communicating with his parents and doctors. On top of that, he gave his team a FaceTime call. Johnson’s parents expressed gratitude for all the support they received since Saturday.

“We feel so much love and support from everyone, and we’re beyond grateful for the care and attention that Keyontae has received throughout these past several days,” Nika and Marrecus Johnson said.

This is the first update via UF no longer reporting Johnson to be in critical condition. All statements until Tuesday reported his condition as such. The Gators forward arrived back in Gainesville yesterday, when he was transferred from Tallahassee Memorial to UF Health.

This news follows a USA Today story reporting Johnson to be in a medically induced coma.

The Gators chose to postpone Wednesday’s game against UNF, per UFAA Communications Director Denver Parler. The makeup date will be determined at a later date. The Gators and the UAA openly thanked UNF for “their flexibility and willingness to make this schedule change.”

Last year, the Gators beat the Ospreys 74-59. This extended the Gators all-time series record to 9-0. Keyontae Johnson had seven points and seven rebounds in that game.

Harrison is a sports coordinator at ESPN 98.1 FM/850 AM WRUF. He served as a beat writer for Florida Gators football for the 2019 and 2020 seasons. He also contributes to WRUF's Gainesville Sports Center segments and makes appearances on the Clash on Harp on Sports. Harrison has been a content writer for WRUF since January 2019 as well.
@HarrisonSmaj
Previous The Game that clinched Florida’s ticket
Next Hawthorne seeks First Football State Title