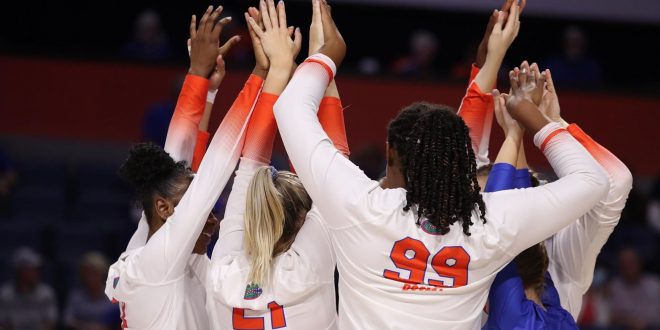 “Nobody beats Mississippi State 54 times in a row,” exclaimed the SEC Network + announcer.

Between sets one and two, Florida hosted a ceremony honoring 50 years of women’s athletics at UF. Children of former female student-athletes spoke in a video and members of the 1995, 1996 and 2010 Southeastern Conference Championship volleyball teams attended. After the pre-set huddle, Wise applauded and greeted her former players as the O’Dome rose to its feet.

Florida quickly tried to get middle Lauren Dooley involved in the offense. But just as quickly, Mississippi State got off to a 5-0 start.

Middle Nnedi Okammaor started the game opposite of Dooley. She has split time with Gabbi Essix while Lauren Forte sits out with an ankle sprain. On Friday, Forte wore a brace rather than a boot.

Dooley’s hitting picked up and she earned three kills on the set.

After a controversial call at 15-14, the Gators responded with some anger. The team, including the bench, leaped into the air celebrating Okammar’s kill.

The Gators stayed in rhythm, winning the first set 25-17.

The Bulldogs got off to a 4-2 start. They served aggressively, resulting in several service errors. From the Florida service line, Monserez and Hall earned the first and second aces of the match.

Setter Gabby Coulter, who got the Bulldogs off to the big start in the first had another turn at the service line. She aced Florida and prompted a timeout from Wise, even after the media timeout, to disrupt her run.

With two kills apiece from Ceasar and Hall, Florida inched closer at 20-19. Margaret Dean dumped the ball over on two, tricking the Gator defense. Florida called its final timeout, down 22-19.

The Gators battled back with kills from their outsides. To end the set, Hall played when the Gators were in serve receive and subbed out after the sideout for Beason to hit right side. On Thursday, Beason subbed in for Victoria and hit three straight kills in the fifth set. Wise explained that the freshman Beason is accustomed to playing outside.

The Gators edged the score closer to 24-23, but the Bulldogs were in-system. Cromartie got the kill. Though they lost 25-23, Florida hit .316; Mississippi State did a good job siding out.

Unlike the opening two sets, the Gators blistered to a 5-1 start over the Bulldogs.

Libero Lilly Gunter led a nine-point run for Mississippi State. After an Essix hitting error, Wise raised her voice, instructing Monserez to set Ceasar in the back right.

In the third set, Beason played left front for Victoria, who took on a back-row defensive role.

The Florida libero overpassed on game point serve receive and soon the Bulldogs took the advantage in the match, 26-24.

The Gators settled in on a rotation with Essix at middle and Beason entering for Hall in the front row.

The back-and-forth scoring continued until Monserez went on a four-point service run to force a  timeout from Bulldog head coach Julie Darty Dennis timeout at 14-10.  Monserez was also able to be offensive throughout the game. She earned two kills and 56 assists.

The Gators played scrappy, saving the ball off of all sorts of block touches. The Bulldog block was brutal though, crushing some attack attempts. Wise called a timeout with Florida ahead 20-17.

Florida holds the 22-19 lead in the fourth. #GoGators pic.twitter.com/SDIr1DEfv2

Essix and Beason blocked Cromartie to win the set 25-21.

The fifth set initially seemed to be Florida’s time versus Mississippi State, especially considering Thursday’s result. The Gators got off to a 4-1 start and Monserez was able to assist a wide variety of Gators early on.

Mississippi State called a timeout down 8-6. Monserez served the Bulldogs out-of-system, leading to a Beason and Dooley block.

With Hall sitting out the front row, Beason entered into serve receive and overpassed the ball. The Bulldogs chipped the Gator lead to one, producing a Gator timeout at 9-8. The Bulldogs tied the game. Hall subbed in and assisted Victoria via a beautifully arched handset from the back left.

After the Bullldog timeout down 11-9, things looked clunky for the Gators. Victoria served the ball into the bottom of the net and Ceasar had an attack error into the net. A Dooley kill put Florida ahead 12-11.

5’9 Cromartie proceeded to hit two straight kills. Florida got the ball back and upon subbing back into the game, Hall uncharacteristically served into the net. The Bulldogs had game point. Ceasar went to tip the ball and it fell short.