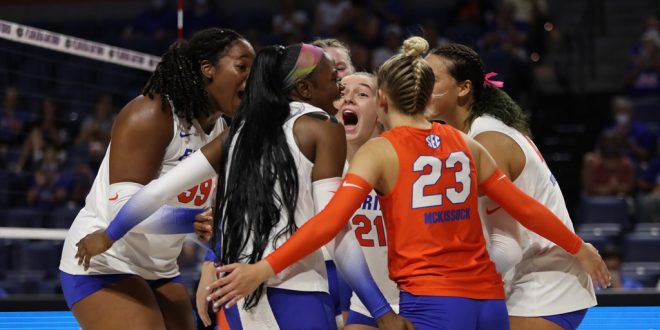 Scenes from the Gators 3-2 win against Mississippi State. Photo by Jordan McKendrick

Last night, Florida Gators volleyball took the Mississippi State Bulldogs to five sets before claiming victory. The Gators won the first two sets at 25-17 and 25-11 but then the Bulldogs responded by taking the next two at 16-25 and 18-25. The match came down to a fifth-set tie-breaker where the Gators managed to escape a tight game that ended in a 15-13 victory. The Florida Gators are ranked at 17th with an overall record of 9-4 and 1-0 in the SEC.

Up at the Net

Florida’s offense put up great numbers on the board last night. T’ara Ceasar assumed her usual position on the leaderboard when she contributed 17 kills and four blocks. Then, Sofia Victoria added 14 kills and 2 blocks of her own. The offensive success can be credited to setter Marlie Monserez who gave 51 assists to her hitters. As a team, Florida registered a .262 hitting percentage.

Freshman OH Merrit Beason made a huge impact on the fifth set when she put down three kills in a row to bolster the scoreboard. Coach Wise spoke on her performance within the post-game conference.

In contrast, the Gators fought a tougher battle on defense and keeping the ball in system. Coach Wise explained that the team struggled at passing the ball and remaining consistent which contributed to the losses in the third and fourth sets.

Although, libero Elli McKissock took control of the backcourt and held up the defense. McKissock registered a career-high of 31 digs within the five sets. In addition, Ceasar picked up 13 digs while Victoria added nine.

The Gators will return to the court tonight to close out the series with the Bulldogs. First serve is slated for 7 p.m.

Parker Welch is a Senior at the University of Florida majoring in Sports Media at the College of Journalism & Communications.
@parkerrwelch
Previous Preview: P.K. Yonge Looks To Rebound On The Road Against Baldwin.
Next Florida Soccer Picks up First SEC Win of 2021