The biggest surprise coming out of Daytona was Danica Patrick, who won the pole while at the same time making history as the first woman to do so in NASCAR. While many have pegged Patrick as not a realistic candidate to win in Daytona, she thinks that there isn’t a reason as to why she can’t win it all on Sunday.

Patrick isn’t the only driver with a chance to win it all Saturday.

Dale Earnhardt Jr. should race very well, despite struggling in the Sprint Unlimited and Budweiser Duel. While it’s been two years since he’s won a race, let’s not forget he finished second in the last two Daytona 500s.

Defending Daytona 500 winner Matt Kenseth is another driver who has a good chance of winning Saturday. Kenseth will start at the 12th position.

Kevin Harvick, who will start in the third position on Sunday, was the winner of the Sprint Unlimited. While Harvick has been a little overshadowed by his Stewart-Haas teammate Patrick, Harvick if a winner Sunday could become the first driver to sweep the Budweiser Speedweeks.

Kasey Kahne will start in the sixth position on Sunday. He finished second-place in the second Budweiser Duel.

Sitting behind Patrick on the pole is Jeff Gordon. Gordon has an impressive six wins at Daytona International Speedway, a figure that leads any current driver by two races. Gordon had a pit road penalty during the Budweiser Duel, something that he will have to get corrected for Sunday.

Kyle Busch was the winner of the second Budweiser Duel. Although he missed the Sprint Cup Chase last year, he finished in the top five of his last seven races in 2012.

The 2013 Daytona 500 should be a good one, and one where history could be made. Can Danica shock the NASCAR world and win it all? Tune in at 1p.m. Sunday to find out. 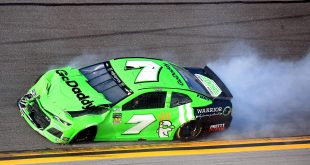 Patrick Crashes out of Final Race

It wasn’t the way Danica Patrick wanted to go out. Athletes dream of winning the …