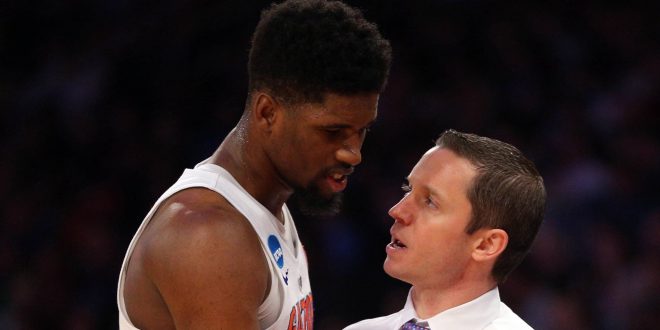 With just over a month until the season tips off, the Gator basketball team looks poised to make a run at the SEC Championship and go even further than that.

Leaning on the guards

Florida returns most of its roster from a season ago, but Coach Mike White is tasked with filling the voids that Egor Koulechov and Chris Chiozza will leave behind. Even with this, senior Kevarrius Hayes is confident that the Gators will thrive at the guard position.

“I feel like we’re in good hands,” Hayes said. “With Mike [Okauru] and Noah [Locke], they’re very good at scoring and getting to the rim.”

One player who the Gators will look to get involved early is Andrew Nembhard, the five star recruit out of Ontario, Canada.

“He can get to the basket whenever he wants to. He’s very good at finishing around the rim, even on bigger guys like me,” Hayes said. “He kind of reminds me a little of Chiozza, the way he’s able to get some of the difficult passes where he wants them.”

Hayes will act as a leader and defensive anchor for the Gators to rely on. He hopes to go out this year on a high note and will lean on the likes of the freshman at times.

“I can’t say I picked a favorite but they all impressed me in certain ways,” Hayes said. Noah’s ability to score, Andrew with his ability to get to the rim and Keyonate with his athleticism, it’s interesting to watch and even play against.

Hayes will play an integral role for the Gators, especially on the defensive end. The center ranked fourth in the SEC last season in blocks per game and looks to build on his play from a year ago.

“I’m finishing more around the rim,” Hayes said. “I’ve definitely been working on a little bit of mid range. Those are things that I thought I could do to help stretch the floor.”

This year’s team will not only rely on its guards, but also its depth. The Gators have play makers at every position and have the depth to potentially go 11-12 deep during any given game.

“I feel like we have all the talent, pieces and tools there,” Hayes said. “It comes down to performing in the game, staying disciplined and doing what we do best which is playing together.”

Previous Will the Jaguars Bounce Back Against the Jets this Weekend?
Next SEC Preview: Texas A&M vs. Arkansas