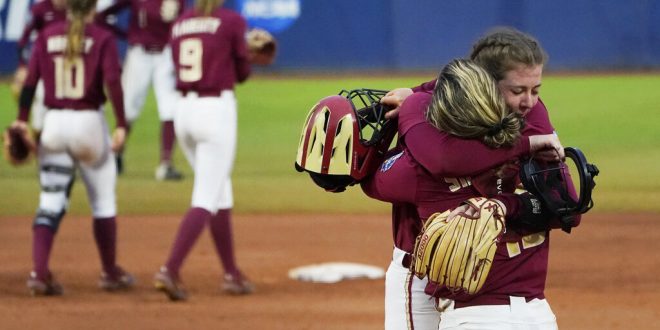 The 2021 D1 NCAA softball tournament is looking to come to a close as only four teams remain. Oklahoma, James Madison, Alabama and Florida State are the remaining teams competing for a national title in the 2021 Women’s College World Series.

In the first bracket of the Women’s College World Series, UCLA and Georgia have been eliminated. The second bracket saw losses from Oklahoma State and Arizona that caused them to be eliminated.

Today’s games will decide which two teams will compete in the championship finals beginning tomorrow.

On Sunday, Oklahoma faced James Madison and showed promise early on. Leading Oklahoma was 2nd baseman, Tiare Jennings. Jennings hit a home run in the top of the 1st inning, which set the tone for the rest of the game.

Jennings had four AB, as well as two runs, two hits and two RBIs. Jennings hit a .484 average against JMU and was a key component in her team defeating James Madison in a final score of 6-3 for game 11 of the Women’s College World Series.

Alabama’s pitcher, Lexi Kilfoyl, struck out nine but walked with the bases loaded in the fifth inning. Alabama only had two hits the entire game and had only one runner reach second.

Another Matchup for the Semifinals

The winners of these two games will play in the championship finals, which are best 2-out-of-3. The first game will begin on June 8 at 7:30 p.m.

Previous The SEC Continues to fight its way through Regionals
Next Jackson Kowar Joins Royals Rotation; Reunites with Brady Singer