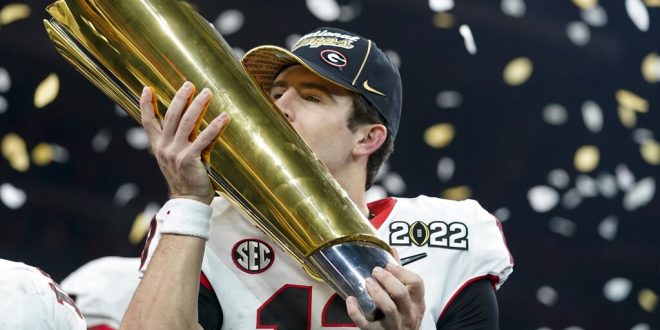 The Georgia Bulldogs took down Alabama 33-18 in the College Football National Championship Game Monday night. This was Georgia’s first national championship since the 1980 season and their second title in history. This win makes Kirby Smart the fourth head coach to beat Dabo Swinney and Nick Saban in the same season.

The Moment We Knew

With 54 seconds left in the game, Georgia cornerback Kelee Ringo had a game-solidifying interception. Alabama quarterback and Heisman trophy winner Bryce Young threw the ball in Ringo’s direction. Ringo returned the ball for a 79-yard touchdown. This is the longest pick-six in championship game history, leading Georgia to be crowned the champions.

This play brought Georgia quarterback Stetson Bennett, a former walk-on to tears. He was not the only one with wet eyes though. Coach Kirby Smart hugged 89-year-old Vince Dooley- the last coach at Georgia before Smart to win a national title- following the game.

It was no shock that these two teams would face each other again soon enough. Alabama had come out victorious on both previous faceoffs, including the 2018 national championship and this year’s SEC championship game. In 2018, Alabama defeated Georgia 26-23 in overtime in the national title game. Alabama had a seven-game win streak in the series prior to last night.

Alabama head coach Nick Saban carried his Alabama team to a 13-2 season. Coach Saban is 25-2 overall against his former assistants as both of these losses came this year. On Monday, Coach Saban fell short to Coach Smart, who worked under him at Alabama. Alabama also lost to Texas A&M this season, who was led by Jimbo Fisher, Coach Saban’s offensive coordinator at LSU.

Coach Smart out-smarted Coach Saban and is now the first former Alabama assistant coach under Coach Saban to beat him. Coach Smart also led his alma mater team to a national title. He was a four-year letterman at defensive back at Georgia and eventually a First-Team All-SEC pick as a senior. Coach Smart received his bachelor’s degree in Finance from Georgia and his master’s in Physical Education from Florida State.

Coach Smart returned to Georgia in 2005 to serve as the running backs coach. In 2006, Coach Smart served as the safeties coach for the Miami Dolphins, the only year he coached in the NFL. Coach Smart joined the Alabama staff in 2007, serving as the defensive coordinator for the Crimson Tide. In December 2015, Coach Smart officially came home to Georgia. Smart continued to work for Alabama as their defensive coordinator when they won their fourth national championship in a seven-year span. Twelve hours later, Smart was at work in Athens and has been ever since.

He is one of ten head coaches from Power 5 conferences that are coaching at their alma mater.

Alabama quarterback and Heisman trophy winner Bryce Young took the blame for their loss to Georgia. Young played without his two top receivers, John Metchie and Jameson Williams. Metchie tore his ACL during the SEC championship game and Williams suffered a knee injury during the second quarter on Monday after catching a 50-yard pass. He was unable to return to the game.

Young had only thrown five interceptions this 2021-2022 season but threw two against Georgia at the time when it mattered the most. Alabama made some big plays against Georgia but struggled to finish drives. Three times in the game, Alabama had first downs inside of Georgia’s 20-yard line but were forced to kick for a field goal instead.

Georgia sat at number one in the country for most of their season until the SEC championship when they fell short to Alabama 41-24. The Bulldogs and their fans everywhere can now say that they are back on top, and they are your 2021-2022 national champions.