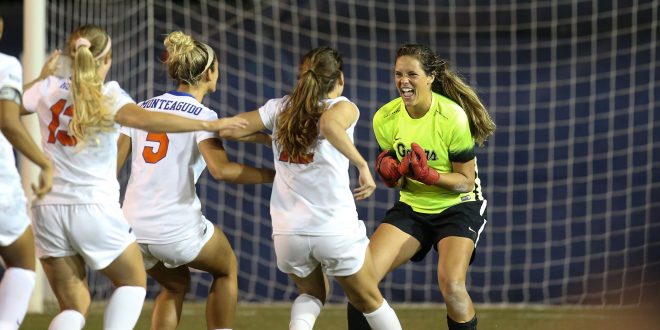 On Friday, the Florida soccer team will play Arkansas in the SEC Tournament semifinal. Florida recently shut out the Hogs 3-0 at Dizney Stadium to clinch the eighth seed in the Tournament. Now, they’ll meet again. The winner moves onto the quarterfinals, while the loser goes home.

The game was originally scheduled for Thursday, but anticipation of bad weather moved the match to Friday at 1 PM.

Another Must-Win Over Arkansas

If the Gators fall to the Razorbacks, their season is most likely over. Coach Becky Burleigh referred to the season finale against Arkansas as a “must-win.”

Friday’s match-up welcomes another necessary win for Florida, as the team’s NCAA Tournament chances are still slim. This season, the Gators did not play up to their typical championship-minded standards.

The team is currently sitting at 7-9-4 overall and 4-4-2 in SEC play. Arkansas’ record is much better at 12-4-3 overall and 6-3-1 in the conference. But, that didn’t stop the Gators from putting together this highlight reel against the Hogs just last week.

If the Gators did it once, they can do it again. After all, this post-season spark is making Florida look more like the team that won back-to-back conference championships in 2015 and 2016.

The Gators battled adversity to get to where they are now. Earlier in the season, the team went seven games without a win. But, they made a final push to keep their season alive. Luckily, this hungry mentality is proving to be successful.

When Florida was the underdog against Arkansas, they beat the odds and shut the Razorbacks out. The Gators topped Auburn in penalty kicks during the first round of the Tournament. Then, they shocked No. 1 seed Vanderbilt to get to play tomorrow.

Goalkeeper Kaylan Marckese is playing like an MVP, allowing just one goal in two Tournament games. Also, midfielder Lais Araujo cracked the All-SEC First Team, so expect her to make some big plays as well.