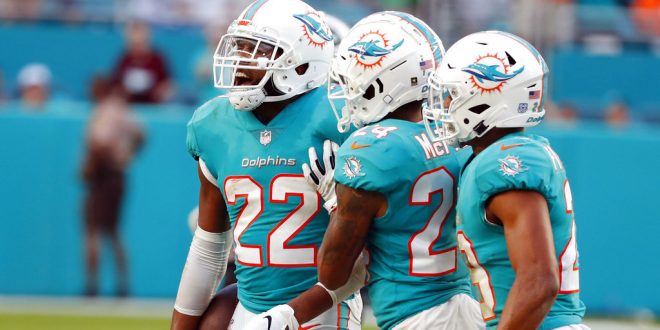 The 5-5 Miami Dolphins couldn’t have asked for a better week for their bye game.

Head Coach Adam Gase gave the players the full week off, expressing the difficulty the team would face finding 46 healthy players to play if they had a game Sunday.

This will be the Dolphin’s first bye week in two years.

DeVante Parker and Jakeem Grant both were scheduled to undergo MRIs on Monday after being injured against Green Bay, Parker for his shoulder and Grant for his calf. Cornerback Bobby McCain is in concussion protocol after being hit by a blindside block on Sunday. Laremy Tunsil and Ja’Wuan James both missed Sunday’s game with knee injuries. While quarterback Ryan Tannehill continued to recover from an injured capsule in his shoulder that he’s had since week five. By the final whistle on Sunday, Miami was down five former first-round draft picks.

Checking in with Coach Gase as the team heads into the bye week.

Tannehill did some throwing against the Packers on Sunday, but the bye week is giving him an extra week to continue to recover. The Dolphin’s goal is to have Tannehill return for their next game, Nov. 25 in Indianapolis.”We’ll just progress through and then see where we’re at next Wednesday,” Gase said on Tannehill.

Pushing for the Playoffs

Despite the injuries the Dolphins are facing, Gase says the only thing eliminated for the Dolphins is an undefeated season. The rest is still on the table. With their 5-5 record, they are a half-game behind the Cincinnati Bengals and the Tennesee Titans in the playoff chase. “We’re right in the thick of things. We’ve got to just take advantage of this bye week and come back with a purpose and get after it,” Gase said.