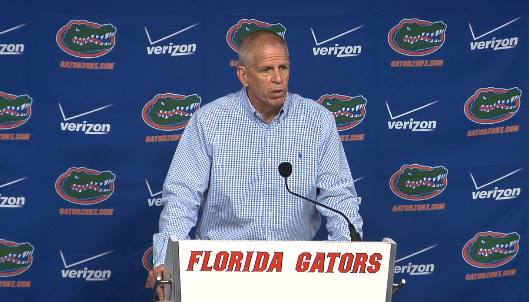 A decision has finally been determined.

University of Florida Athletics Director Jeremy Foley and University of Idaho Athletics Director Rob Spear have reached an agreement that Saturday night’s season opener which was suspended due to lingering rain and dangerous lightning has been declared a no contest. However, both Florida and Idaho have agreed to schedule a game in Gainesville for the 2017 season on a date that has yet to be determined. Foley said this is the best decision for both schools and football programs.

“We looked at a number of options and, in the end, we both thought it was in the best interest of our student-athletes and football programs to play out the remainder of our respective schedules as they stand,” Foley said.

The University of Florida released a statement stating that Florida will fulfill the terms of the contract between the two school’s and pay Idaho its $975,000 guarantee by February 1st 2015.

According to the statement released by The University of Florida, all fans who purchased a ticket through the Gator Ticket Office will be given a full refund of the single-game ticket price that they paid for the game.  Those who used a credit card to purchase their tickets will automatically be issued a refund back to the credit card that was originally used for the transaction by Sept. 8, 2014.

Meanwhile, fans who purchased tickets in advance of the game on Saturday and paid with cash or a check will receive a refund check in the mail by Sept. 22, 2014 while those who purchased tickets with cash the day of the football game will have until 5 p.m. on Sept. 30 to contact the Gator Ticket Office at (352) 375-4683, ext. 6800 to inquire about their refund.

Therefore, Florida’s first official game of the season will be this Saturday against Eastern Michigan in The Swamp with coverage on ESPN 850 WRUF starting at noon.