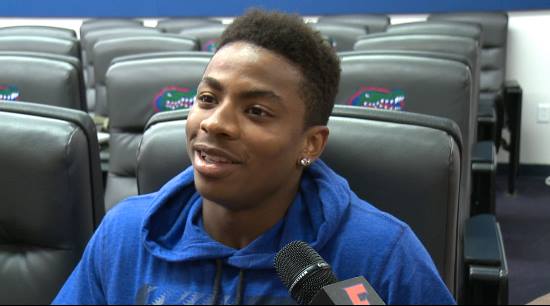 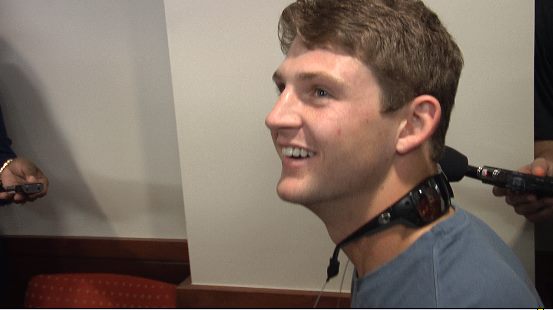 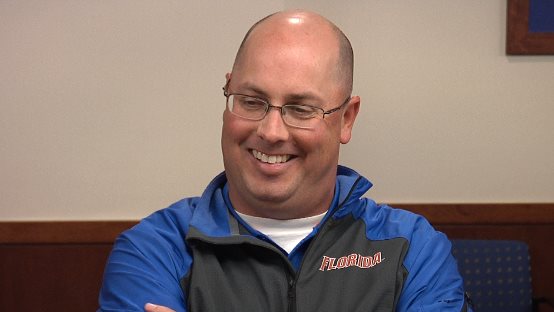 The Florida Gator football team is in full swing prepping for its next SEC battle against the South Carolina Gamecocks this weekend. The Gators are coming off an impressive 34-10 road victory over Vanderbilt where Florida’s offense had a strong showing and the squad will look to continue its success on Saturday.  Offensive coordinator Kurt Roper and a few players discussed the team’s big win and preparations for the upcoming SEC finale.

In his second career start for Florida, true freshman quarterback Treon Harris completed 13-of-21 passes for 215 yards and scored on two rushing touchdowns.  Roper says there seems to be a spark in Florida’s offense with Harris at the helm, and elaborated on how the young quarterback seems to be adjusting to his new job under center.

“There’s obviously some things we have to work out. He hasn’t arrived by any stretch of imagination, but he does have a calm demeanor, he does a good job with his vision and buying a little time; moving in the pocket and just making plays.”

“I think he enjoys playing so much that he doesn’t feel the outside pressures or things like that,” Roper added.  “I think he’s a guy that obviously understands the role. He just goes and plays and doesn’t let other things influence him. It’s interesting to see.”

Roper also emphasized on how the running game has helped Harris out, especially in Florida’s 38-20 win over Georgia where the Gators rushed for 418 yards as Harris attempted only six passes.

“Being able to run the football with a young quarterback really helps try to take some pressure off of him and try to build some confidence, so we aren’t putting him in a game that’s necessarily a difficult game at this point. We would like to be a run-first-physical mentality team. I think that’s our identity that you’re seeing, but the game can change based on the score so that can fluctuate.”

The Miami native from Booker T. Washington was named the starter during Florida’s bye week, replacing fourth-year junior Jeff Driskel. Driskel didn’t get a single snap in the team’s victory over the Bulldogs but did see some action in the Wildcat formation last week against Vandy, where he carried the ball four times for 10 yards and a touchdown on a fourth-and-goal situation. Although Driskel’s role is not what he envisioned, he says he will do whatever he can to help the Florida program succeed.

“At the end of the day it’s a team sport and everyone has to contribute and do their part,” Driskel emphasized. “If mine is the back-up and not getting any plays at all, I want to be ready in case Treon goes down. If it’s being in a wildcat type of role, I want to be ready to run the ball and understand the blocking schemes and the defense we’re going to get. I think it’s not just me that feels that type of responsibility; I think that’s something that you have to have in a team sport.”

“Being a competitor, you always want to be the guy and have the ball – but at the end of the day I was raised right,” he emphasized.  “I think my parents did a great job instilling a sense of, ‘a team is greater than an individual’.”

Meanwhile, Roper discussed the offense’s overall status heading into Saturday’s game, as well as the keys to success.

“I think we’re pretty good.  Again, our biggest thing, if we can score over 30 points and take care of the football, we’re in pretty good shape.  The Georgia game we had really good tempo, we were having really good first down production in the run game. Last game it wasn’t as easy, it was hard to run the football against what Vanderbilt was doing.  We ended up in more second-and-long, so that was making me have to think before I just threw a play out there.  If you watch, we like to hit a lot of tempo after explosive plays. That’s no secret.”

The Gamecocks enter this weekend’s contest on a quest to end a four-game SEC losing streak, its longest since 2007;  while Florida can remain alive in the SEC East race with a win against South Carolina.  But in order to do so, they must be prepared for a defense  whose had a few rough weeks – but still poses as a threat for the Gators.

“You know, it’s interesting, you see a team that was much more multiple from the Auburn game to the Tennessee game, giving you more problems and front recognition and those type of things.  You see an aggressive secondary, you know, you see a team that’s not afraid to press you, I think they’re nickel is a heck of a player, a fast twitch guy that does a lot of really good things in the run game, so you see a defense that has had a tough couple of weeks, but you see a defense that causes you some challenges.”

Kickoff is set for noon, with coverage of the game beginning at 8 a.m. on ESPN 850 WRUF.

Driskel on his role in the offense

Driskel on handling the back-up position