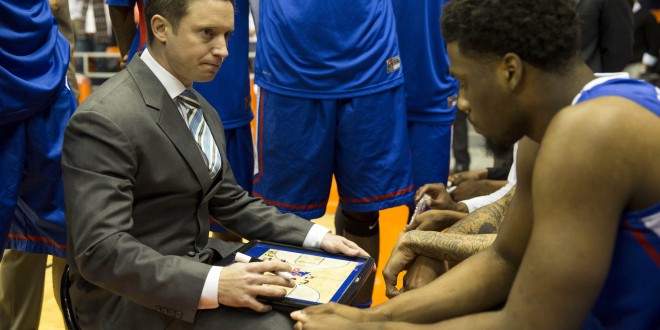 Florida men’s basketball finished last season with a disappointing record of 16-17, an anticlimactic stamp on what proved to be the end of Billy Donovan’s illustrious run at Florida. Tonight, a new era will be ushered into the O’Connell Center, even if the final result won’t count towards new head coach Mike White’s ledger.

The Gators host the Palm Beach Atlantic Sailfish in an exhibition game. It’s a fresh, exciting start for a program rebooting in all facets.

White inherits the reigns at Florida following a successful four year stint at Louisiana Tech in which the Bulldogs earned three consecutive NIT appearances. NIT berths won’t cut it at UF though, who finished 2014-2015 under .500 for the first time in 17 years.

It’s a unique set of circumstances for everybody, but White hopes the Gators will use this to their advantage.

Egbunu and Allen will be seeing their first playing time in a Gator uniform. Egbunu started all 31 games for USF before arriving in Gainesville in summer 2014.

Allen is a four-star ESPN prospect and a two-time Gatorade Player of the Year in Arkansas. Among the class of 2019 is Brandone Francis-Ramirez, Kevarrious Hayes, and Keith Stone, but Allen figures to see the most early playing time.

Although there are plenty of unknowns, there’s also a lot of promise on the roster. But Mike White is not concerned about individuals and stat lines.

Palm Beach Atlantic lost their top four scorers from last season. The top returner is forward Mike Simpson, who tallied 7.6 points and 2.5 rebounds per game during an average of 17.5 minutes of playing time.

Realistically, the Sailfish present no significant threat to the Gators. It’s still live game experience, so White hopes to see the team improve on offensive rebounding and clean defense they’ve displayed in practice.

Tipoff tonight is at 7.

Florida opens the regular season on the road next Friday night at Navy.

Previous SEC Preview: Auburn at Texas A&M, What to Watch For
Next Gators Focused on Vandy, Not East Title