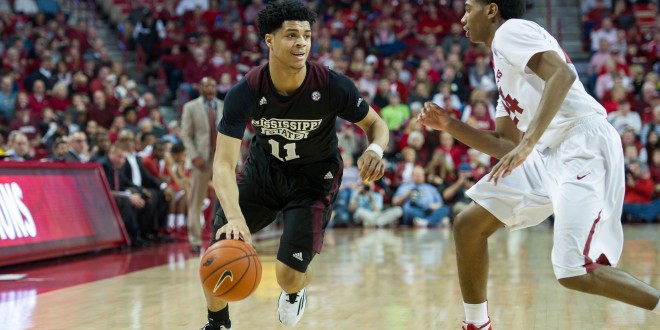 The Arkansas Razorbacks will take on the Mississippi State Bulldogs tonight at “The Hump”, otherwise known as Humphrey Coliseum, in a big SEC rivalry.

The Razorbacks are coming off a 85-67 win against the Tennessee Volunteers, whereas the Bulldogs lost their most recent game to LSU, 88-77.

A win over the weekend isn’t the only thing on Arkansas’s side. The Bulldogs and Razorbacks went head to head earlier in January, and Arkansas came out on top, winning 82-68 at home.

MSU is 9-13, 2-8 in SEC play. Head Coach Ben Howland had a rough first season with the Bulldogs, losing their first five games. The Bulldogs’ two wins in the SEC have come from Missouri and Ole Miss, the same team that the Razorbacks play next. Senior forward Gavin Ware leads the team in both scoring and rebounding, shooting at 62.5% from the field.

In the last game that the Bulldogs and Razorbacks played against each other, Arkansas shot 16-for-24 on 3-pointers, their second-best mark in program history.

Arkansas is currently 12-11(5-5 SEC). Tonight’s match-up opens a two-game road swing for Arkansas, and they will travel to Oxford Saturday to take on the Ole Miss Rebels. Head Coach Mike Andersen is 6-1 against the Bulldogs at Arkansas, 7-4 overall. The game tonight is an important one for the Razorbacks as they hope to maintain their winning season.

The Razorbacks hope to clinch yet another win this year over the Bulldogs, while Mississippi State hopes to end their losing streak with a home victory. Tip-off is set for 9:00 p.m.