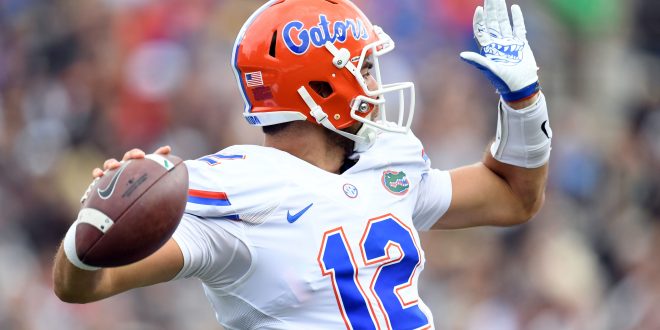 It wasn’t the prettiest of games, but QB Austin Appleby and the Florida Gators got their fourth win of the season against Vanderbilt last Saturday 13-6. It was Appleby’s first win while starting under center as a Florida Gator. The grad transfer from Purdue has started the last two games for an injured Luke Del Rio and has gone 1-1; Florida lost to Tennessee the week before during a second-half collapse for the Blue and Orange.

Appleby did enough against the Commodores to help lead the Gators to their first road win of the season. He threw for 144 yards on 19-28 passing and added 12 yards on the ground. The sixth-year QB didn’t throw for any touchdowns and only turned the ball over once.

This week will be a tougher matchup for Austin Appleby and the Gators as they welcome SEC rival LSU to the Swamp. No official announcement has been made on whether Appleby will be the starter or if Del Rio will make a return from the knee injury he suffered against North Texas. Either way, Appleby is preparing this week as if he’ll be under center on Saturday.

The official depth chart released by the Gators list Appleby OR Del Rio as the starter against LSU. If Appleby starts this week’s game, he’ll be going up against former teammate Danny Etling. Etling and Appleby are both transfers from Purdue where the two competed for the starting job in 2014. Etling started the first five games and Appleby started the last seven; the two went a combined 3-9 that season. The QB competition between the two carried into the spring of 2015, where Appleby won the job leading to Etling’s transfer to LSU. Appleby says he usually texts Etling good luck before games and roots for him. This week things will be different.

The No. 18 Gators will welcome LSU to the swamp Saturday with kickoff set for noon.

Im a senior at the University of Florida currently pursuing a degree in Telecommunications. I work for ESPN Gainesville 95.3 and anchor the Monday sports broadcast for WUFT First At Five. Im from New York and an avid sports fan of all New York teams.
Previous Gator Football: McElwain on Win Over Vandy, LSU and Injuries
Next Seminoles Fall to UNC, Drop in Rankings