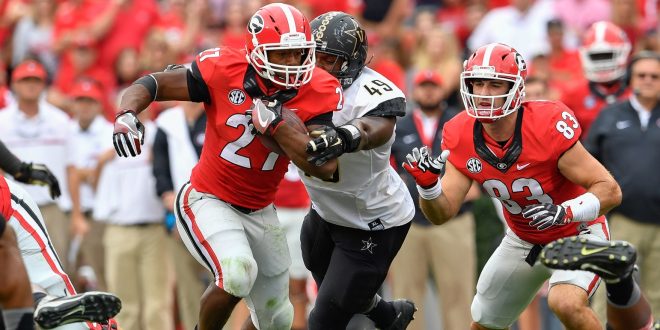 The Bulldogs are coming off an impressive 13-7 upset over No. 8 Auburn Tigers, even limiting the Tigers to just 32 yards and no first downs in the second half. Despite the win, Georgia’s offense failed to reach the end zone, and their only touchdown on the day was scored by their defense.

Louisiana-Lafayette travels to Georgia for the second straight week after defeating Georgia Southern last Saturday, 33-26. Quarterback Anthony Jennings passed for 210 yards and led the rushing attack with 96 yards and a touchdown.

Statistically speaking, the two teams are a very close match up when you compare their 2016 season averages.

But despite the stats coming into the game, the performance of the players will be the deciding factor.

Georgia quarterback Jacob Eason has impressed in his rookie season, completing 165 of 303 passes for 1962 yards, 11 touchdowns and five interceptions. He also has a rushing touchdown on the season. He should perform well against the LA passing defense that allows an average of 257.1 yards per game.

The backfield has taken a running back by committee approach with Nick Chubb and Sony Michel. Chubb missed some time due to injury, but he’s rushed for 792 yards and five touchdowns, and has a 4.7 yards per carry average on the season.

Michel has done well with an increased role, rushing for 542 yards and two touchdowns, and averaging 5.2 yards per carry.

Anthony Jennings, the Ragin’ Cajun’s quarterback, is a graduate transfer from LSU. This season, he’s completed 155 of 249 for 1643 yards, nine touchdowns and seven interceptions. He’s also added four touchdowns on the ground.

Georgia Head Coach Kirby Smart understands the challenge that Louisiana-Lafayette poses, and discussed the skill that the Sun Belt Conference has and the SEC caliber players that play for the Cajuns.

Kick-off for the game is set for noon.