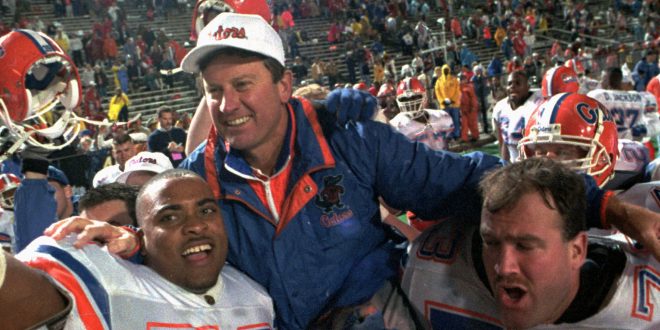 Florida Gators head coach Steve Spurrier is carried on the field by Cameron Davis, 56, and Jim Watson, 73, after the Gators Downed the Alabama Crimson tide 28-3 in the 1993 SEC Football Championship in Birmingham, Ala., Dec.4, 1993. (AP photo/Dave Martin)

On Saturday, Florida takes on Alabama in the 25th edition of the SEC Championship Game. It’ll be the 12th time the Gators play in the game and the ninth time they’ll face the Crimson Tide. It’s easy to see it as routine, maybe even an expectation of the two schools. But former Florida head coach Steve Spurrier knew it was anything but routine in 1992.

That year, Roy Kramer, commissioner of the SEC from 1990-2002, exploited a little known NCAA bylaw to divide the 12-team SEC into the East and West. He then announced that a new conference championship game would determine the winner of the SEC. It was a brilliant move considering how much revenue it generated. In 1992, Spurrier’s third year coaching Florida, the Gators won the East and met Alabama in the newly created SEC Championship.

Spurrier loved the idea of the game. In fact, he called it the biggest game of the year (unless you went on to play in the national championship). Florida lost to Alabama (Spurrier considered it his weakest Gator team) but Kramer’s creation began a domino effect of conference championships across college football.

From that year on, the Gators had a set goal — to reach the SEC Championship game. Under Spurrier, they were pretty darn successful. From 1993-96, they won the game, culminating in the school’s first national championship in 1996.

The ‘Head Ball Coach’ may not roam the sidelines with a headset anymore, but he’s still close to Florida as an ambassador. In early October, the conference he helped elevate bestowed another honor on him.

Steve Spurrier named to the 2016 #SEC Football Legends class. 1 of 14 who will be honored at the SEC Championship Game on Dec. 3. #Gators

On top of being named an SEC Football Legend, Spurrier joins Kramer and Gene Stallings (Alabama’s head coach to the 1992 team that beat Florida and went on to win the national championship) in the coin toss before the game.

In 2014, after much criticism of the BCS system, college football relented and switched to its current playoff system. A 13-member committee ranks the top 25 teams weighing several factors like strength of schedule, team record, conference championships and more. The top four teams play in a bracket-style tournament to crown an eventual winner.

Spurrier, whose 1996 national championship came when the Sugar Bowl was the designated title game that year, thinks the current playoff system gets some things right, but isn’t quite there yet. He believes the conference winners should be given more priority than they’re already given.

The Gators are 24.5-point underdogs, the largest point spread in the title game’s history. The Tide have the best defense in all of college football. They allow a paltry 247 yards per game and 11.4 points per game. Florida, while also a top five team in defense, doesn’t match up with ‘Bama on offense.  The Tide are 15th in FBS with 245 yards of offense per game while the Gators are 104th with 141 yards per game.

It’s a massive uphill battle, but as Spurrier’s team showed in 1992, it could be closer than you think.