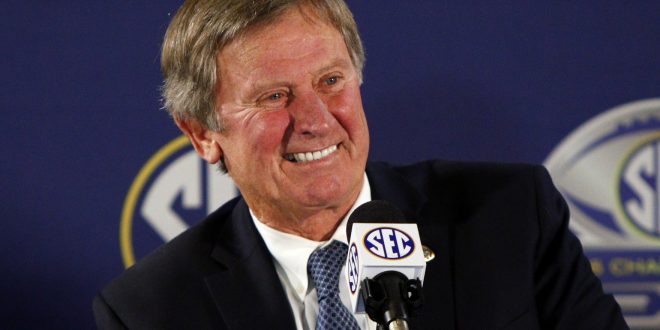 University of Florida legend Steve Spurrier was reentered into the College Football Hall of Fame, Monday.

Spurrier had previously been entered into the CFB Hall of Fame in 1986 for his efforts as a player. He is now reentering for his accomplishment  as a coach. Spurrier is only the fourth coach to enter into the hall, joining Amos Alonzo Stagg, Bobby Dodd and Bowden Wyatt

Spurrier began his head coaching career at Duke from 1987-1989 where he went 20-13-1. Then, in 1990, Florida hired Spurrier as head coach and the rest was history. Spurrier was named Southeastern Conference coach  of the year five times and won the SEC championship six times, including the Gator’s first SEC title in 1991.

During his tenure as head coach, Spurrier led the Gators to their first national championship in 1997, when they defeated Florida State in the Sugar Bowl 52-20. Spurrier also coached 1996 Heisman winner Danny Wuerffel, making him the only person to win the Heisman trophy and coach a winner of the award.

Another component of Spurrier’s resume was his tenure at South Carolina. After a brief stint in the NFL with the Washington Redskins, he joined the Gamecocks in 2005. Prior to Spurrier, South Carolina had never won more than 10 games in a season. Spurrier coached the Gamecocks to three 11-win seasons in his 11 year tenure.

When Spurrier retired in 2015 he had the second most wins (228) in SEC history behind Bear Bryant (323). Spurrier is also the winningest coach in both Florida and South Carolina history. In addition to his numerous accolades in the record books, Spurrier changed the way college football was played. His pass heavy offense, nicknamed fun ‘n’ gun, contrasted the rush heavy offenses of the SEC at the time. His innovative methods changed how coaches across the SEC called plays.

Currently, Spurrier is an ambassador and consultant for the Florida Gators Athletic Department.