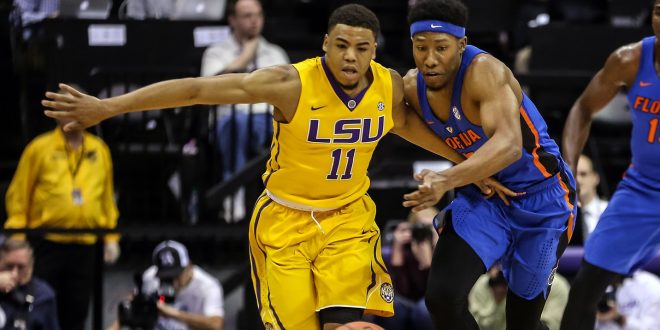 In their previous two games, the Florida Gator men’s basketball team struggled from downtown, going 8-for-42 (19%) from beyond the arc. Whether it was Mike White’s two-hour meeting following practice earlier this week, or the team’s two-game losing streak, something clicked for the Gators on offense on Wednesday night against LSU.

Florida shot 19-for-33 (58%) from the three-point range, setting the school record for three-pointers made in a game, en route to a 106-71 win over the Tigers. UF’s 106 points set a new season high in scoring, as well. Florida Head Coach Mike White felt great about how well his team played on the road and the absurd amount of shots from downtown that they hit.

Devin Robinson finished the contest with a career-high 24 points, going 5-for-8 from downtown, as six different Gators including KeVaughn Allen (11), John Egbunu (11), Kevarrius Hayes (12), Justin Leon (15), Eric Hester (16) and Devin Robinson (24) finished in double-digit scoring. Coach White praised both Devin Robinson for how tough he played throughout the course of the game.

19 3-pointers is a program record! The previous record was 18 against Robert Morris in 1996. Eric Hester hits the 19th 3

In a rare occurrence, the Gators outrebounded the Tigers, 39-31, grabbing seven more defensive rebounds than LSU. Florida had 24 assists on 36 made shots, with Chris Chiozza paving the way, finishing with nine dimes of his own while adding nine points. UF led LSU for 37 minutes and 27 seconds of the game. White credited his reserves for continuously playing solid basketball throughout the second half.

The Gators knocked down two of their first five three-pointers to take an 11-8 lead with a little more than four and a half minutes played in the game. Against Vanderbilt, Florida shot a below-average 32 percent from beyond the arc.

After a rough first half to the season, Chris Chiozza seemed to find his stride about midway through the first half. “Cheese” hit three-pointers on back-to-back possessions to give Florida a 22-12 lead with 11:26 left in the first twenty minutes. Coming into the game, Chiozza hadn’t scored more than eight points since midway through December.

With 9:19 left in the first frame, the Gators hit seven buckets in a row and were 8-for-12 from beyond the arc, matching their amount of made shots in their most recent loss to Vanderbilt. Florida led 33-16 at that point in the contest.

The streak of made shots continued, as Florida knocked down ten shots in a row, capped off with a John Egbunu three-point play. The Gators took their first 20-point lead with 6:36 left to play in the first half.

Florida took their biggest lead of the game into halftime as they led LSU, 58-33, after 20 minutes of play. 58 points was a season-high in the first half for the Gators.

The Gators shot an unbelievable 11-for-15 (73%) from beyond the arc in the first half. Florida finished the first frame just five three-pointers short of their season-high of 16, which came against Arkansas Little-Rock.

Wayde Sims led LSU in first half scoring, finishing with eight points on 3-for-3 shooting. The Tigers shot 13-for-35 (37%) in the first frame, going a poor 1-for-9 (11%) from downtown. UF also outrebounded LSU, 23-15, in the first twenty minutes. The Gators finished with 13 assists on their 18 made baskets.

Florida took their first 30-point lead of the game just 30 seconds into the second half off of a John Egbunu jumper and Devin Robinson three-pointer.

With nine and a half minutes remaining in the game, a Robinson alley-oop followed by a Robinson solo jam would put the Gators up by 27. Robinson set a new career-high on the back-to-back scores. His previous career-high was 21 points, which came earlier this season against Arkansas Little-Rock.

The game stayed at the same pace for the rest of the way, as the Gators took down the Tigers, 106-71. Florida will stay on the road, skipping the opportunity to come home to Gainesville, as they take on Oklahoma next on Saturday at 2 p.m. in Norman. Coach White previewed the Sooners following the team’s win vs. LSU.

Florida won at LSU tonight by 35. And I don't mean by five touchdowns.