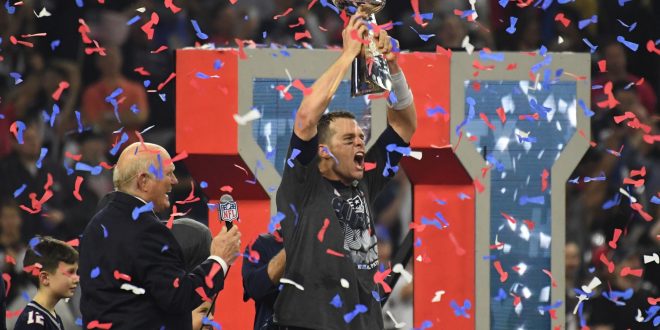 HOUSTON, TEXAS – The MVP of the Super Bowl for the fourth time is one of the main reasons why the New England Patriots will wake up Super Bowl Champions today. Tom Brady led his team back from a 21 point deficit as the Patriots worked their way back to force overtime for the first time in Super Bowl history and beat the Atlanta Falcons 34 to 28. During the first half, the Patriots looked like they did not have a chance to win. The Falcons defensive line was able to generate a great amount of pressure on the Patriots quarterback, however Brady got into a groove late in the third quarter that no one could stop, resulting in the win.  Brady says anytime you are a champion, it is special.

During the first half, this Super Bowl was all Atlanta Falcons. At halftime, the Falcons led the Patriots 21 to 3 after Brady threw an interception to Falcons defensive back Robert Alford who turned it into a pick six, running 82 yards untouched for the score right before halftime. Early in the third quarter, it seemed as though nothing had changed as the Falcons scored a touchdown to make it 28 to 3.

Some thought this Super Bowl was over, but not the Patriots. Cue one of the best comebacks in Super Bowl history. From that third quarter Falcons touchdown on, Brady completed 26 of his 33 passes for 283 yards as New England scored on their last five full possessions, including the game winning drive. In the overtime drive, Patriots running back James White received the hand off and ran it in from two yards out as the Patriots  became Super Bowl Champions.  Owner of the New England Patriots Robert Kraft says this win is the sweetest of them all.

Another look at the game-winner: https://t.co/PPqeBZX31f

Tom Brady has now been named the MVP of the Super Bowl four times, an NFL record. He previously won it in 2001, 2003 and 2014. Brady finished the game 43 for 62, with the most pass attempts in Super Bowl history, for 466 yards and two touchdowns. This win is now the fifth Super Bowl win of Tom Brady’s career and he’s now played in more Super Bowls (seven) than any other player.  And coach Bill Belichick is the first coach to win five Super Bowls and he says the New England Patriots deserved to be Super Bowl Champions this year.