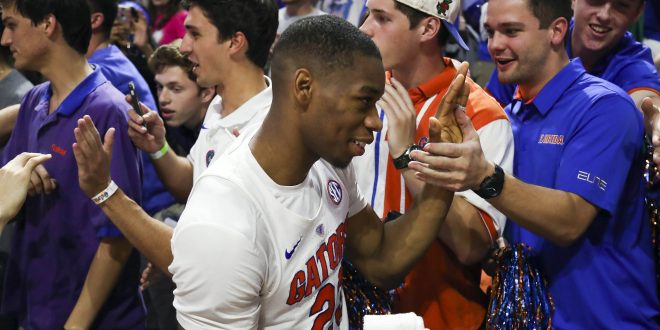 No. 12 Florida Preparing For Final Home Game of the Season vs. Arkansas

The first season at Exactech Arena has been one to remember for the Gators. Florida is currently 8-1 at home, with their only loss coming to Vanderbilt in late January. Since then, the Gators have won four straight SEC home games and have their best home record since the 2013-2014 season, in which they made the Final Four. On Wednesday night, Florida faces off against Arkansas in their home finale. The Razorbacks were the Gators’ SEC opener this season back in December. Florida won that game 81-72 in Fayetteville.

Before Senior Night, Inside Gator Basketball sits down with Kasey Hill to look back on his 4 years at @UF. pic.twitter.com/N2INWZaOqE

Arkansas’ slogan for the past couple of seasons has been “The Fastest 40 Minutes in Basketball.” Along with the Gators, the Razorbacks play one of the quickest games in the nation and love to get into transition with their athletic guards and wings. Arkansas ranks 27th in the nation in points per game, averaging 81 per contest. Leading the attack are junior and senior guards Daryl Macon and Dusty Hannahs.

We’ll start with Hannahs, the leader and driving force of the Razorbacks’ offense. Hannahs has been at the University of Arkansas for two years after transferring from Texas Tech. He’s no stranger to the Gators and has averaged 21.3 points per game in his three match-ups with Florida. On the season, he’s averaging 14.7 points per game on 45.2% shooting from the field. He also knocks down 39% of his looks from downtown.

Daryl Macon is a junior, but in his first season with the Hogs after transferring from Holmes Community College. Macon is a lightning-fast, 6’3″, 185-pound guard who can score with the best of them. He’s recording 13.7 points per game this season and is averaging 20.7 points per game in his last three contests. He’s also shooting 56.3% from beyond the arc in that same span.

Can Moses Lead Arkansas to the Promised Land?

Moses Kingsley has been a Fayetteville staple for four years now after coming to the small college town by way of Abuja, Nigeria. The near seven-foot big man is averaging 11.8 points, 7.7 rebounds and an SEC-leading 2.7 blocks per game. He has 17 blocks in his last five games and six double-doubles on the season. While it’s Kingsley’s last season with the Hogs, he will more than likely have an NBA future. For now, he’ll be focusing on his date with Kevarrius Hayes, Schuyler Rimmer and Keith Stone in the Exactech Arena paint for the final time of his career.

Like Kingsley, Arkansas’ play has been phenomenal as of late. They’ve won their past five games, with victories over LSU, South Carolina, Ole Miss, Texas A&M and Auburn.

Wednesday night will be the last time Kasey Hill, Canyon Barry, Justin Leon and Schuyler Rimmer play at the O’Connell Center. Each player has had their own contributions to the university, whether it’s been a full four years like Kasey, or just one season like Canyon.

Kasey Hill has been at the University of Florida since the 2013-2014 season, when Florida made the Final Four. Although he was just a freshman, then backing up Scottie Wilbekin, Hill has improved each season. This year, Kasey is averaging a career-high 9.5 points, 2.9 rebounds, 4.8 assists and 1.8 steals per game. He’s currently second in assists and fourth in steals per game in the conference and has finally settled into his game as the ultimate play-maker, instead of an all-around shooter and scorer.

Hill is also near the tops of the leaderboards in numerous statistical categories at UF. He’s currently 51st in all-time points, trailing Vernon Maxwell by 32. He’s 39 assists away from tying Erving Walker for the all-time dimes lead at UF and is five steals away from passing Corey Brewer and Dwayne Davis for t-2nd on the all-time steals list.

Justin Leon has transformed from a back-end of the rotation player to an every-game starter for the Gators. In his 22.2 minutes per game played, he’s averaging career-highs in points, rebounds, assists, blocks and steals per game and has turned from a 3-4 stretch forward into a knockdown three-point shooter Leon is shooting 40.4% from downtown this year, which ranks ninth in the SEC.

He Shoots His Free Throws Underhand and His Dad is Rick Barry?!

Canyon Barry is in his first and only season with the Gators and will be gone from the team after this year. Despite the short stay, Barry has become a household name because of his free-throw style and all-around smooth game. He’s the second-leading scorer on the team and ranks first in the SEC in free-throw percentage at 89.9%, although his goal for the season is to finish at 90% or above. In 18 games this season, he’s scored at least 12 points off of the bench and has provided steady depth to the roster as a the team’s sixth-man.

If Barry can reach 90.1% at the charity stripe by the end of the season, he will have the single-season free-throw percentage record, beating Anthony Roberson by .01%. He’s also tied for the school record for 20+ points games off the bench, needing one more to pass Anthony Roberson and Kenyan Weaks.

Schuyler Rimmer is in his second year with the Gators after transferring from Stanford. He hasn’t been the most efficient player on the court, or put up the highest statistics, but Mike White has always praised him as one of the hardest working players during games and on the practice court. He’s done as much as he’s able to, skill wise, on the floor during John Egbunu’s absence, despite his efforts not making a dent in the box score.

By The Numbers and Bracketology

According to Joe Lunardi’s latest Bracketology, the Gators are still a 3-seed in the East Region. Lunardi predicts they’d play Belmont, who they’ve already defeated this season. Arkansas is currently a 9-seed with a date with Dayton in Buffalo in the East region as well. The SEC now has five teams in the field, as Vanderbilt was added in Lunardi’s latest bracket as one of the “Last4” in.

At his press conference on Monday, Mike White discussed Arkansas’ team as a whole, Kasey Hill’s last game, Canyon Barry’s injury, Devin Robinson’s improved defense and rebounding and how the team took the loss to Kentucky.

Canyon Barry is still not 100% according to Mike White and is not expected to be for the Arkansas game on Wednesday. Despite this, he and Keith Stone are still expected to play as usual. Gorjok Gak remains out with no timetable for his return after being declared out, “10-14 days.” That time period has passed and he still hasn’t returned.

Wednesday’s game is Senior Night at the O’Connell Center and tips off at 7 p.m. on ESPN2 with Joe Tessitore and Sean Farnham on the call. You can listen to the game as always on the Gator IMG Sports Network.