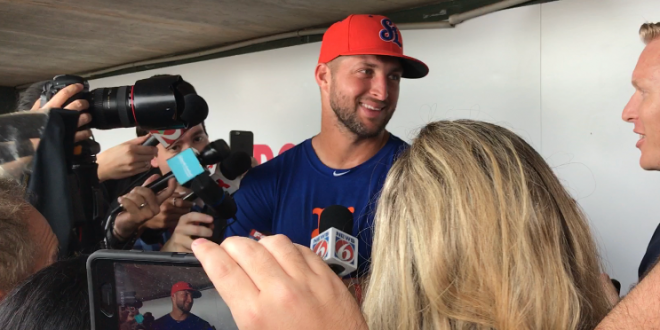 Tim Tebow and the St. Lucie Mets visited the Florida Fire Frogs last night to begin a four game weekend series. The two teams have never met this season and this was Gator alum’s first visit to central Florida. Watch above video for a complete recap of the opening game.

Filled with anticipation, Gator fans came to watch the former Gator football star in action. The game was expected to be a sold out event, but unwanted rain plagued Osceola Stadium up until an hour before the first pitch. However, that still did not stop a record number of fans from seeing their beloved two-time National Champion take the field. In his pre game interview, Tebow said that he knows just how loyal Gator fans are and that he will always be a fan of the Gators.

Fans heading for the exits after being part of a record crowd of 4,581. Join us tomorrow at 7:05 for game 2 and post game fireworks! #HopOn pic.twitter.com/hz3hWxPs9v

Tebow played 64 games with the Columbia Fireflies maintaining a .220 batting average. Despite his statistics, on June 26, 2017 he signed with St. Lucie as a part of the Met’s Advanced A-affiliate team. Now, in just 23 games, Tebow has three home runs with the St. Lucie Mets–the same number he had in 64 games with the Fireflies.

Tebow came into last night’s contest with a .320 batting average, three home runs and 14 RBI’s in 22 games. But on opening night, Tebow struggled to connect going  0-3 at the plate and striking out twice. Tebow was able to make contact in his final at bat in the eighth inning, but a diving catch by the Fire Frogs center fielder sent Tebow back to the dugout. Regardless of his struggles, Gator fans were happy to see the 29-year-old Gator alum doing what he is so passionate about. Tebow said that as unusual as it is for people to see him playing baseball, he doesn’t want to get older and look back with any regrets. He also said that everyday there is something new and he is always learning.

FINAL: Fire Frogs 4, Mets 1. Gibbons solid in return and Rodriguez homers but the Mets drop the opener. Back at it on Saturday. #STLMets

The St. Lucie Mets will play again this evening at Osceola County Stadium to take on the Fire Frogs at 7:05 pm.