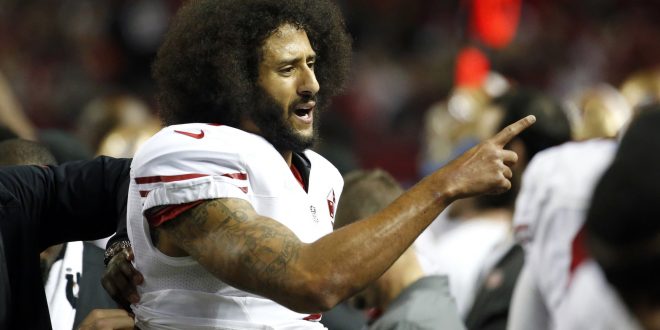 With training camps in full swing and the NFL preseason about to start, quarterback Colin Kaepernick remains a free agent.

Kaepernick as an NFL Talent

There’s not much doubt that Colin Kaepernick is an NFL talent. Last season, Kaepernick started 12 games for the 49ers. He posted the 17th highest quarterback rating, the 13th highest touchdown percentage, the sixth lowest interception percentage, and looked like he returned to form after coming off an injury. Kaepernick had a statistically solid season, despite being surrounded by dysfunction in the 49ers franchise. Teams may not want Kaepernick to be their starting quarterback, but many feel as if he should at least have a roster spot as a backup. So why does he remain unsigned?

Last season, Colin Kaepernick decided to kneel during the national anthem in each game to protest inequality. The controversy was one of the major NFL headlines all last season, attracting negative media attention for months. That attention Kaepernick would bring to a team is certainly a factor in why no team has chosen to sign him. At the beginning of free agency, Kaepernick even decided to announce that he would stand for the national anthem for the team that signed him.

No more kneeling for Kaepernick! NFL player says he'll stand for the National Anthem next season, if another team hires him pic.twitter.com/Im2uifYFqh

Is Kaepernick Being Blackballed?

As of late, rumors are swirling that Kaepernick might be being blackballed by the NFL in order to avoid more media controversy for the league as well as a punishment for Kaepernick. Some feel as if the NFL does not want to associate itself with the free agent quarterback and is discouraging teams from signing him behind the scenes. There have been rumors of several teams interested in signing Kaepernick, including the Jets, the Seahawks, and most recently the Baltimore Ravens. The Jets, a team devoid of talent at the quarterback position, have shown no indication that they will sign Kaepernick. The Seahawks chose 28 year old Austin Davis to be their backup. Davis hasn’t played in a game since 2015 and has only 10 career starts. With teams choosing to sign inferior talent, the question of whether he is being blackballed must be asked.

Here’s what commissioner Roger Goodell said about the idea of Kaepernick being blackballed.

Where Will Kaepernick End Up?

The Ravens are the team that Kaepernick is currently most associated with. Ravens starter Joe Flacco reportedly has a serious back injury, and the Ravens depth behind Flacco is scarce. Ryan Mallett, Dustin Vaughan, and David Olson make up the Ravens depth chart behind Flacco.  If the Ravens don’t sign him now, a team may sign him during the season after re-evaluating their team needs.