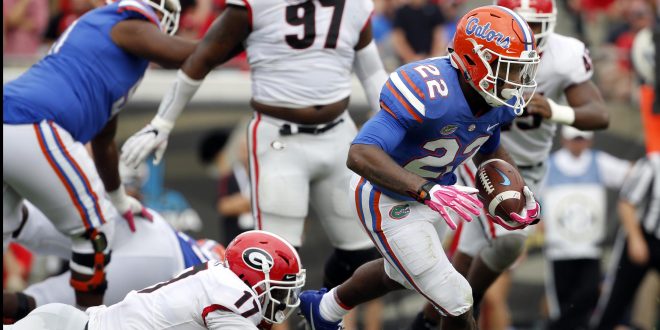 For the first time since 2014, Florida will play a football game without Jim McElwain at the helm.

That’s also the last time the Gators lost to the Missouri Tigers.

Florida (3-4, 3-3 SEC) travels to Columbia to take on Missouri (3-5, 0-4 SEC) with Randy Shannon as its’ interim head coach following McElwain parting ways with Florida this past Sunday. The Gators are looking to end a three-game skid in conference play, following a 42-7 demolition by Georgia last week. The Tigers meanwhile are still looking for their first win in SEC play.

Zaire in at QB

Shannon has nothing to lose as the interim head coach, and is already shaking things up for the Gators.

Mainly, he’s made a switch at the most important position on the field.

Graduate transfer quarterback Malik Zaire will make his first start of the season after being named the starter Thursday. Zaire replaced a struggling Feleipe Franks against Georgia, who hadn’t led a scoring drive and had only 30 pass yards through three and a half quarters. Zaire came in and appeared to give the offense a jolt. He led them on their only scoring drive, and through for 36 yards while rushing for 30.

It remains to be seen how different the offense will look with Zaire in charge. However, with Shannon’s comments from earlier in the week, its safe to expect some more zone reads and option plays to suit Zaire’s style of play.

“We’ve got to make sure we do the things he can do,” Shannon said Tuesday. “Whatever quarterback it is, and make him successful.”

Something that may make Zaire’s life a bit more difficult than hoped for is the loss of stud freshman running back Malik Davis for the rest of the season, due to a knee injury suffered in the first half against Georgia. The loss of Davis is a big one for the Gators, as he leads the team in rushing with 526 rush yards. In his absence, Lamical Perine will continue to get a good share of the carries, and expect a heavier dose of Mark Thompson, who stands to get a large chunk of the plays that would’ve gone to Davis.

Luckily for Zaire, two of his receivers are trending upwards in terms of their health. Josh Hammond is listed atop the unofficial two-deep this week and looks set to return. Tyrie Cleveland meanwhile, played sparingly against Georgia, but looks good to go against Missouri.

Shannon said #Gators WR Tyrie Cleveland should play vs. #Mizzou, didn't miss an reps in practice: "We're excited to have him back."

That jump has been obvious, as Lock has 28 touchdowns on the season, while averaging 320.9 pass yards per game.

Drew Lock's 28 passing TDs are the most by an SEC QB through the first eight weeks of the season since (at least) 2000. #Mizzou

J’Mon Moore has been Lock’s favorite target on the season, hauling in 39 receptions for 679 yards and seven touchdowns on the season.

J'Mon Moore is the highest graded WR for the second week in a row. pic.twitter.com/gGHHL6SG5w

Lock has also had success finding his tight end Albert Okwuegbunam, who leads the country in receiving touchdowns for a tight end with seven.

The downfall for Missouri though, and a big reason why it’s winless in conference play, is because of its defense. The Tigers rank last in the SEC in turnover margin, and next-to-last in passing defense and total defense. They’re giving up an average of 453 yards per game, which puts them 112th in the country in that category.

So something will have to give when they hit the field against a similarly struggling Florida offense that ranks 112th in total offense. If Missouri is to have success on defense, it’ll lean on a pass rush that ranks fifth in the conference with almost three sacks per game. It’ll look for continued good play from Terry Beckner, Jr., who has 3.5 sacks and 5.0 tackles for loss over the past three games.

The all-time series is 3-3, with Florida winning each of the past two meetings. The Gators took last year’s matchup in Gainesville 40-14. Missouri’s last win against Florida came in Gainesville in 2014, when the Gators got embarrassed 42-13 on Homecoming.

Kickoff from Columbia on Saturday is at noon, with coverage on ESPN 2 and ESPN 98.1 FM/850 AM WRUF.