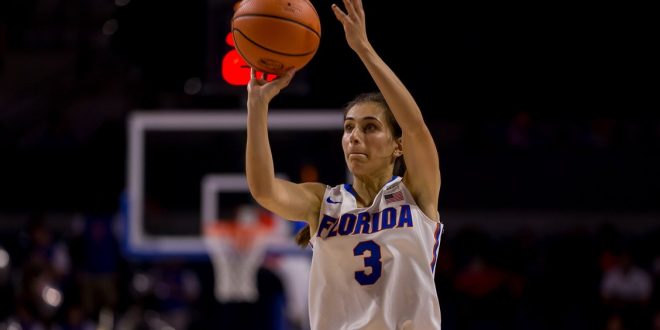 The Florida Gator women’s basketball team has shown positive signs in their last two wins. They have shown that they can overcome an injury to a key starter. The Gators have shown that they can find different ways to beat you offensively. However, one thing that the Gators haven’t done yet, is beat a quality opponent. They have the opportunity to do so when they travel to Norman, Oklahoma Sunday to face the Oklahoma Sooners as part of the Big 12/SEC Challenge.

The Gators approach each game the same way, win or lose. The team tends to focus more on themselves rather than their next opponent. This style allows the players the opportunity to correct the issues they or the team as a whole have. Gator Head Coach Cam Newbauer explains why the team has adopted this method, that has worked this season. This approach has shown its worth through the Gator’s play. The Gators have shown to correct some concerns like response to full court press and establishing a strong inside presence. This was made possible by correcting the mistakes before they became catastrophic.

Sunday poses an interesting matchup for the Gators against Oklahoma. The Sooners, led by head coach Sherri Coale, come into the Big 12/SEC Challenge with a 3-3 record. Oklahoma will be coming off a 68-56 loss on Tuesday to Arkansas-Little Rock. A player that will be crucial for the Gators to slow down Sunday is Oklahoma senior guard Gabbi Oritz. Coach Newbauer is impressed with Ortiz’s style of play.

Every time a team gets a win, it’s meaningful. It’s meaningful for the players, coaches, and fans. A win to represent your conference is what the SEC would say, “just means more.” A win over Oklahoma in the Big 12/SEC Challenge would definitely have more meaning. This will be the first time that the Gators will participate in the challenge. This is also the first year each team from each conference is participating. Senior forward Haley Lorenzen says that resiliency is key in this game with conference pride on the line.

After Tuesday’s win over Jacksonville, Coach Newbauer revealed that junior guard Funda Nakkasoglu wasn’t 100 percent. This is what led to her struggling in the game on the offensive side. Nakkasoglu’s presence on the court, however, allowed for other players to get quality looks being that the Dolphin defenders had their attention on her. On Sunday, Nakkasoglu needs to make an impact for the Gators to get their first signature win on the season. Nakksoglu says that the ankle is improving. She should be in the starting lineup again for the Gators in Norman.

On Sunday afternoon, the Gators will take the floor in Norman to face the Sooners in the Big 12/SEC Challenge. Tip-off is set for 2 p.m.