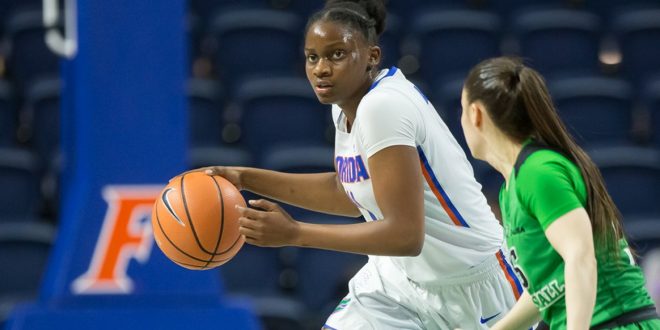 The Florida women’s basketball team ran its record to 6-4 on the season after beating Marshall at home 74-69 on Sunday.  For three quarters, it was smooth sailing for the Gators; they were in full control of the game, leading at one point as many as 20 points. Then, the fourth quarter saw the Gators struggle shooting the ball and Marshall cut Florida’s big lead to just two points. The Gators were able to knock down key free throws, sealing the win. Even though the team almost blew a huge lead, there were several bright spots coming out of Sunday’s win.

The three point shot is an instrumental part of the Gator offense. The team lives and dies by the three ball. On Sunday, three pointers were raining down. The Gators knocked down 13 threes on 35 attempts, totaling 37%. Senior guard Dee Anderson led the charge offensively for the Gators, leading all scorers with 18 points, with her five field goals coming from beyond the three point line. Junior guard Funda Nakksoglu added 17 points, with four of her five field goals coming from three point land. Sunday was the fifth time this season that the Gators hit on double-digit three pointers. The previous four times that happened resulted in Gator victories. Anderson says that the confidence the team gets from head coach Cam Newbauer drives them to keep shooting the three ball.

The last two times the Gators stepped on the court the turnover bug hit hard, as Florida committed 45 turnovers in all.  Turnovers proved extremely costly in the loss to Ohio State Wednesday night as 24 Gator turnovers were attributed to sloppy passes and mental errors. Those mistakes were almost nonexistent in Sunday’s win over Marshall. The Gators had 14 turnovers that led to only 15 Marshall points. Many of the turnovers and points came in the fourth quarter. Even though the turnovers didn’t play a key factor in the win Sunday, Newbauer isn’t satisfied in how the game was played, specifically in attacking Marshall’s defense.

Following the loss to Ohio State, the main miscue from the team was the individualistic style of play the team was running offensively. Players put themselves in one-on-one situations and the lack of success made their deficit grow larger and larger. Immediately after the game, the Gators knew that to be successful, they have to stick to the game plan of moving the ball for the great shot. The Gators stuck with the game plan on Sunday and it showed. They finished the game with 18 assists. Sophomore guard Delicia Washington led the team with five assists. Nakkasoglu says the offensive success against Marshall was due to the team moving the ball around.

The Gators had a rough time Sunday finishing the game on a high note. The Gators boasted a 60-44 lead by the time the crowd swayed and sang “We Are The Boys.” The Gator defense shut Marshall down in the third, only allowing 15 points but they started to take the pedal off the gas and let Marshall back in the game. The Thundering Herd thundered their way to being down by two with 12 seconds left. The Gators were able to knock down key free throws to put the game away for good.  Coach Newbauer viewed the tight ending as a good thing for his team. To keep this from happening again, Anderson says they need to keep the defensive intensity up the entire game.

The Gators will get some much needed time off to tend to final exams and nagging injuries. They will return to the court on December 20 as they host the Gator Holiday Classic. The Gators will play Chattanooga in the first game with tip-off set for noon from the O’Connell Center.