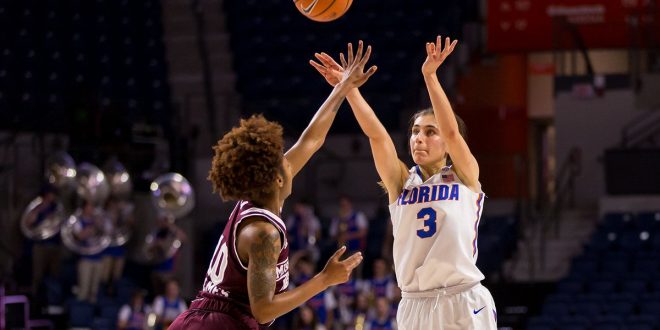 Gator Women’s Basketball Goes the Distance With No. 7 South Carolina in 64-57 Loss

The Florida Gators put together an impressive performance that made their showdown with defending champion South Carolina a four-quarter contest. Florida led by as many as 10 in the first half and did a solid job at times defending South Carolina star A’ja Wilson. In the second half, Florida engaged in a back and forth contest where they weren’t able to take the lead late. The Gators fall a hard fought one to the No. 7 Gamecocks 64-57. Even though this was Florida’s fifth loss in a row, there were several positives coming out of this one.

After a back and forth first quarter, Florida made its move in the second quarter.

A wide-open three-pointer from Florida senior guard Dee Anderson started what would balloon to a 15-0 run for the Gators. Florida senior forward Paulina Hersler sank her only three of the night off an Anderson steal to give the Gators their first lead on the afternoon. That lead would only grow more thanks to layups from Anderson and Florida sophomore guard Delicia Washington. Florida junior guard Funda Nakkasoglu prevented a South Carolina steal with a steal of her own that led to a Hersler jumper, giving Florida a seven-point lead. Nakkasoglu’s corner three-pointer with 4:09 left in the half was the exclamation to Florida’s 15-0 run that gave them a 10 point lead on the defending national champions.

In the second quarter, Florida’s defense forced eight South Carolina turnovers that led to 13 Florida points. The Gator defense even shutdown A’ja Wilson, who went scoreless for ten minutes. Florida’s defense was focused on protecting the paint. Throughout the game, Florida defenders played off the three-point line. The guards collapsed on the paint to help the forwards if Wilson got the ball close.

Florida didn’t keep South Carolina down for long. Following Florida’s 15-0 run, South Carolina responded with a 12-2 to close the quarter. A Washington jumper was followed up with an A’ja Wilson lay in at the buzzer to tie the game at 30 going into the half.

The Gamecocks came out of the half swinging. They continued their run and by extending it to a 20-2 run. Florida was held scoreless until Nakkasoglu hit a corner three to make it a five-point game. The Gators kept trying to rally and got close to the Gamecocks several times. South Carolina appeared to put the dagger in Florida when Gamecocks guard Tyasha Harris hit a three and sank a layup on consecutive possessions to give the Gamecocks a 12 point lead with 3:06 remaining. Florida would cut the lead, but only ten seconds remained in the game.

The Gators had a ton of trouble against No. 2 Mississippi State Thursday night. However, against defending national champions in their building, the Gators put a much better performance on tape. Nakkasoglu led the team with 21 points with 15 coming beyond the arc on 5-8 shooting. Florida senior forward Haley Lorenzen totaled 13 points on 60% shooting. Washington had 8 points and led the team in rebounds with 13. As a team, Florida shot 35.9% (23-64) from the field that included 9 made threes.

The Gators did everything they needed to do to win. They had some open looks that just didn’t go down. The main thing is that Florida was in a position to win this game. To put that performance together in a tough environment that included members of the USA Women’s Basketball team is almost as good as getting the win.

Following the game, Gators head coach Cam Newbauer was very proud the way the team stepped up to the challenge.

The Gators close this six-game gauntlet with a trip to College Station to face No. 14 Texas A&M Thursday night.