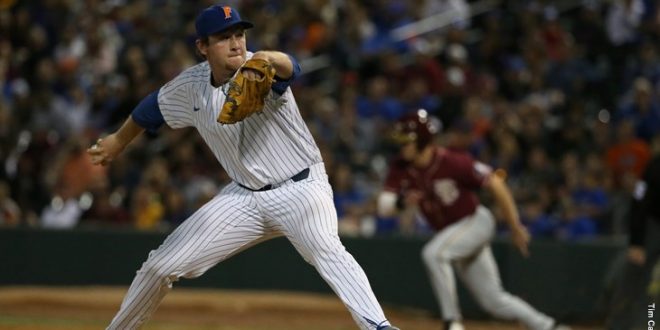 Despite having to wait through an almost a two hour rain delay to start Friday’s game, the Florida baseball team was able to come out strong and pick up an 8-4 victory over the Vanderbilt Commodores in a top ten match up in Gainesville.

Although 12 runs were scored between both teams, pitching was the deciding factor in the game. The match up started out as a pitcher’s duel as both starting pitchers allowed just one hit until Florida’s half of the fourth.

In the bottom of the fourth, the Gators put the first run of the game on the scoreboard. Jonathan India showed off his versatility when he got the inning started for Florida with a bunt single down the third base line. Wil Dalton followed with a single to left. After a wild pitch allowed both runners to advance, JJ Schawarz hit a sacrifice fly to right to make the score 1-0.

Gator head coach Kevin O’Sullivan says India’s willingness to lay down a bunt in this situation shows what kind of a player he is.

Florida starter Brady Singer set the tone of the game for his team. He was able to shut down the Commodore offense, earning a season high 11 strikeouts. However, he did give up one home run in the seventh.

Closer Michael Byrne took over later in the game and shined on the mound. Byrne kept the Commodores off the board and threw just 21 pitches in his 1.2 innings of work to close out the game for the Gators. This gave Byrne the 26th save of his career, a new Florida record.

O’Sullivan says he is very pleased with his pitchers’ performances during tonight’s matchup.

After picking up their second run on a Nelson Maldonado double in the fifth, the Gators broke the game open in the seventh inning.  Deacon Liput drove an RBI double to right center, and India continued his hot streak, jacking his 10th home run of the season, bringing in two more Gator runs. With this blast, India has tied Dalton for the team lead in home runs and surpassed Dalton for the team lead in RBI (24).  Florida tacked on their fifth run of the inning, and seventh of the game, when Dalton scored on a wild pitch.

Vanderbilt fought back in the top of the eighth and scored three runs on a home run off of reliever Tommy Mace.

But the Gators weren’t done yet, stretching their lead to four runs in the bottom of the eighth on a fielder’s choice hit by Maldonado.

Byrne strikes out the final batter and #Gators beat No. 8 Vandy in the series opener. pic.twitter.com/nV5SxszVm1

The Gators will have a quick turnaround, as they’ll face Vanderbilt for Game 2 of the series Saturday at noon. Jackson Kowar (4-1, 3.13 ERA) will take the mound for Florida while Patrick Raby (2-3, 2.19 ERA) will get the start for Vanderbilt. The game will be broadcast on ESPNU.

Previous Gator Softball Records Perfect Game Against Hampton
Next No. 8 Gators Lacrosse Turns In Most Dominant Victory Against UConn