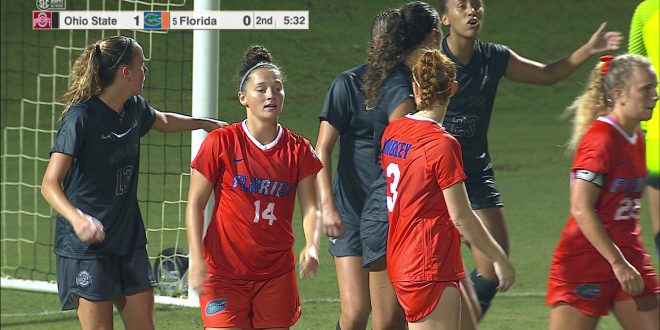 Florida soccer (2-2) is back in Gainesville this weekend with hopes of snapping a two-game losing streak. The No. 22 Gators will now take on UCLA and Southern California. UCLA and USC are both ranked second and seventh respectively according to the United Soccer coaches poll respectively, will give the Gators a challenge.

With no goals scored in their last two games, Florida has some work to do. Goalkeeper Kaylan Marckese recorded nine saves and allowed one point apiece from Ohio State and Oklahoma State. That is the only stat line for Florida soccer since August 19th.

Luckily for the Gators, UCLA is not a high-scoring team. The Bruins (2-0) have scored just three goals in two games. USC is a different story. So far, the Trojans (3-0) have outscored their opponents 16-1.

Florida soccer is an elite team. The Gators have played in every NCAA tournament since 2003. Looking ahead, the team must remember that and keep it moving in order to get back up to par.

Both Roberts and Troccoli agreed that the Gators must focus on themselves instead of UCLA or USC heading into the weekend. Unlike Florida, both teams are coming off of big wins to continue undefeated seasons. UCLA topped fifth-ranked Penn State and USC had its third shutout of the season over Pepperdine.

Head Coach Becky Burleigh echoes those thoughts and adds that this weekend could be make-or-break.

Love how our team is bringing it! pic.twitter.com/AYSZUhJW2s

The Gators take on UCLA Friday at 7PM. They only get a short break until Sunday when USC comes to Dizney Stadium for a 3PM match. Beating two top-20 teams will not be easy for Florida. Moving past roadblocks now will be integral to the rest of the season.