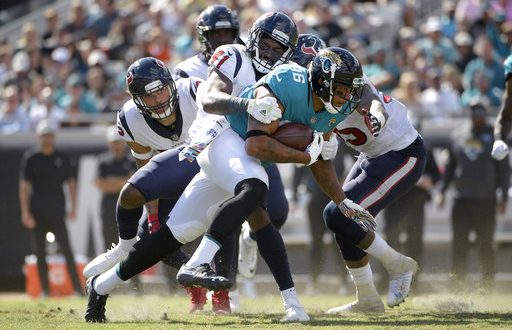 It was a rough Sunday afternoon for the Jacksonville Jaguars as they suffered their third consecutive loss this season when they fell 20-7 to their division rivals, the Houston Texans, at home.

Heading into this game, the Jags, Texans, and Tennessee Titans were all tied for first in the AFC South, but with Houston’s powerful performance, and win, they are now in first place.

The Texans are now riding a four-game win streak taking down the Indianapolis Colts, the Dallas Cowboys, and the Buffalo Bills, respectively, before Sunday’s game.

Heading into Sunday’s matchup, both the Jags and Texans were sporting a 3-3 record. But unlike the Texans and their three-game win streak, the Jags were coming off a rough 40-7 defeat at the hands of the Dallas Cowboys. Prior to that game, the Jags lost to the Chiefs in Kansas City 30-14.

Hoping to turn their luck around, the Jags took the field Sunday afternoon to face the Texans.

But within minutes, Jags quarterback Blake Bortles fumbled the ball and it was recovered by Texans defensive end Jadeveon Clowney. Ready for the challenge, the Jags defense took the field opposite Texans QB Deshaun Watson.

Jags defensive end Dante Fowler Jr. took advantage and sacked Watson for a loss of 8 yards. In fact, this sack was the 26th time Watson has been taken down this season and is currently the most in the NFL. However, that didn’t stop him. Watson had put the Texans within field goal range and only five minutes into the game the Texans were up 3-0.

Bortles made his way back onto the field, but he couldn’t get his team into any kind of scoring position. So, a punt return later and the Texans had possession. Now, ponder this. What happens when three guys try to take down the quarterback? Usually, the QB is sacked. Not here though. Watson somehow “deked” the Jags defense and ran the ball out of bounds.

Not long after that impressive sack escape, there was this insane one-handed catch by Texans wide receiver DeAndre Hopkins for a 31-yard gain.

Although the Texans had two great plays, they couldn’t get a touchdown and settled for another field goal. Texans were up 6-0 at the end of the first quarter.

With the Texans defense all over Bortles, it made it hard for the Jags offense to get into scoring position. Something else the Jags struggled with on Sunday was their defense. Granted they had some solid plays, it still wasn’t enough to stop Texans running back Lamar Miller, who ran it in for a Texans touchdown. They were up 13-0 at the end of the second quarter.

Things only got worse for the Jaguars right after halftime when Bortles fumbled the ball again, allowing the Texans to work their way back to the goal line and score again. Houston was up 20-0.

Needing a change on offense, Jaguars head coach Doug Marrone benched Bortles and brought in Cody Kessler. The Texans already had a significant lead over the Jags, but Kessler still worked for it. He got his team on the board toward the end of the third quarter with a six-yard pass to T.J. Yeldon, but in the end, he couldn’t get it done either.

The final score in Jacksonville was 20-7.

After the game, several players and Marrone commented on the team’s performance and how they’ve been playing over the last few weeks.

Defensive end Calais Campbell expressed his thoughts saying, “We’re trying to get going. Obviously what we’ve done so far is disappointing. This isn’t what we set out to do.”

Without stealing the famous Tim Tebow “Promise” speech, linebacker Telvin Smith said and promised, that this team would bounce back.

The Texans, concerned about the effect air pressure could have on Deshaun Watson’s bruised lung and injured ribs, sent Watson to Jacksonville via bus — a 12-hour ride — instead of taking flight w team. Amazing what Watson has been playing through @NFLonFOX

After the game, Marrone shared his thoughts on why his team is struggling. ESPN Gainesville’s Zach Oliveri has more on their offensive struggles.

Next up, the Jaguars will head across the pond to London, England to face the defending Super Bowl Champs, the Philadelphia Eagles, on Sunday, Oct. 28. Kick-off is set for 9:30 a.m.

As for facing the Texans, the Jags will have another chance at redemption when the two meet again in Week 17. Only this time, they’ll be in Houston.