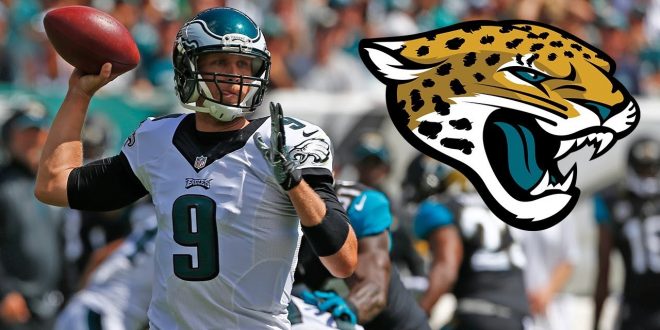 The former Philadelphia Eagles quarterback brings his talents to Jacksonville for at least the next four years.

Thursday morning, the most valuable player of Super Bowl LII, signed a four-year contract with the Jacksonville Jaguars. His name? Nick Foles.

Excited to get back to my roots and wear #7 again for the first time in my NFL career! pic.twitter.com/x6TlTajHwO

The Jaguars didn’t hold back their excitement when Foles was introduced to the media on Thursday by Jacksonville’s Executive Vice President Tom Coughlin. Coughlin discusses how Foles can be an asset to the Jaguars offense.

Coughlin said he believes that Nick Foles gives them the best chance to win and be successful as a football program.

What Foles is looking forward to

The newest member of the Jaguars offense is looking to first, bond with his teammates. Foles discusses how excited he is to be in Jacksonville and how important it is to create chemistry in the locker room.

What Foles brings to the team

The Jaguars offense have experienced inconsistency over the past five seasons under quarterback, Blake Bortles. Due to the signing of quarterback Nick Foles, Bortles was released from the team Wednesday night.

The Jaguars program hopes that Foles can turn the program around and eventually lead the team to a Super Bowl Championship.

Foles led the Eagles to their first Super Bowl championship as a backup quarterback in 2017. He was the first quarterback ever to throw and catch a touchdown pass in a Super Bowl. He was named the Super Bowl MVP after defeating the New England Patriots 41–33. Foles completed 28 of 43 passes for 373 yards, three passing touchdowns, and one interception.

His experience with tackling adversity will be a great asset to the Jaguar’s offense.

It’s safe to say that Duval County couldn’t be happier to welcome Nick Foles to the program and see what’s in store. Fans are hoping their first Super Bowl Championship is on the horizon for Foles and the Jaguars.