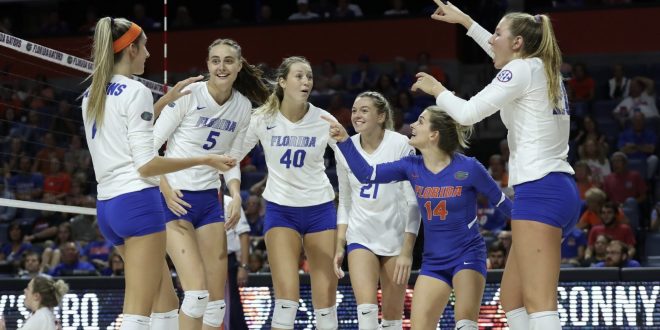 Florida Gators volleyball is set for a battle between two nationally ranked teams. The No. 13 Gators face off Wednesday night with the 24th-ranked Missouri Tigers in Columbia.

This is just the 13th meeting between these schools. The Tigers dropped Florida in a five-setter in these teams’ last meeting in 2018. Florida leads the series all-time 7-5 but is 0-3 in five set matches. Although, Florida defeated the Tigers 3-1 during their last trip to CoMo in 2017.

Florida could have its hands full with this Missouri offensive attack. The Tigers lead the conference in overall hitting percentage at .320 and are second in that same stat against SEC teams (.291).

Watch out for junior outside hitter Kylie Deberg. The Iowa native leads the SEC in kills per set overall (5.02) and against conference teams (5.10). Her 331 kills on the season are also the most in the conference.

The offense runs through redshirt sophomore setter Andrea Fuentes. She’s the conference leader in assists per set and averaged almost 15 assists per set (89 total) in Missouri’s wins over Arkansas and Mississippi State. That performance earned her both SEC Setter and Overall Player of the Week.

However, Missouri’s defense might be exploitable. The Tigers rank near the bottom in digs per set at 12.05 and blocks per set at 1.98. Teams overall hit .221 against them and SEC teams hit .230.

Thayer Hall was unreal over the weekend and that performance didn’t go unnoticed. The SEC named her Offensive Player of the Week alongside South Carolina’s Mikayla Robinson

On Friday night she posted a machine-like 15 kills on 31 swings with no errors for a career-high .484 hitting percentage against Alabama.

Hall recorded her ninth double-double of the season against Tennessee on Sunday afternoon. She registered 13 kills and 11 digs along with three blocks and two service aces.

Over those two matches she averaged four kills, almost five points and over two digs per set plus a .353 clip.

Florida’s last match against a Top 25 team resulted in a five-set loss to the Kentucky Wildcats. They call Missouri the “Show Me State.” Let’s see if Florida can show that it’s a different team since then.