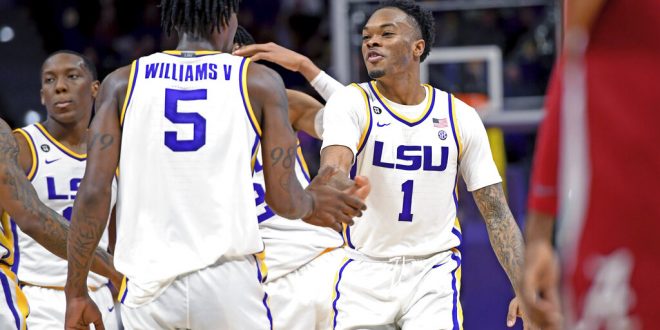 Although the final score showed the Tiger’s dominance by the end of the game, Alabama (12-8, 4-3 SEC) played them tough for some time. With ten minutes to go in the first half, LSU (16-4, 7-0 SEC) was up by just four points. But after those first ten minutes of play, the Tigers began to pull away. By halftime, LSU was up on Alabama 51-33.

A major component to that large lead came from Emmitt Williams. He posted an impressive 23 points and grabbed 11 boards. That was good enough to tally his fifth double-double of the season. Below is just one of his nice lay-ins from the second half.

Freshman Trendon Watford also posted a double-double. He tallied up 17 points and an impressive 15 rebounds.

Each player in LSU’s starting five posted at least 12 points in last night’s win. This is a clear show to the balance and depth this team has.

The Crimson Tide began to cut down the deficit in the second half. With 13 minutes to go in the game, Alabama had trimmed the lead to be down by just nine, 62-53. Scoring came from freshman Jaden Shackelford and Alex Reese. Shackelford, a freshman, posted an impressive 21 points. Meanwhile, Reese tallied 17.

Coming off the bench, Jaylen Forbes made a mark in the big road game. He grabbed five boards and scored seven – a career-high for the freshman.

Despite these efforts, LSU went on a six-point run at the 13-minute mark and kept Alabama at bay. The Tigers stayed up by around ten points, before pulling away to win 90-76.

A stark difference between the two teams in this game was their performance from the free-throw line. The Crimson Tide shot ten free throws, making just six. Meanwhile, the Tigers shot 20, making 19 of them.

Looking forward, Alabama has two home games in the next week – taking on Arkansas and Tennessee. Meanwhile, the Tigers’ next big games will be against Auburn and Kentucky, both happening in the upcoming weeks.  LSU sits at the top of the SEC rankings, ahead of both of these two teams. No. 13 ranked Kentucky knocked off Vanderbilt last night.