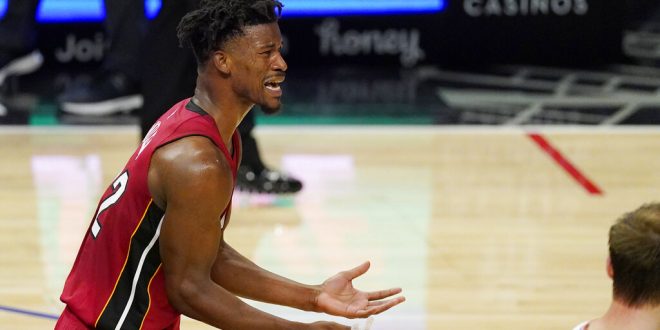 Miami Heat forward Jimmy Butler talks to his teammates during the second half of an NBA basketball game against the Los Angeles Clippers Monday, Feb. 15, 2021, in Los Angeles. The Clippers won 125-118. (AP Photo/Mark J. Terrill)

It seemed like it could be the Miami Heat’s night, with the Los Angeles Clippers down four starters. But despite some big numbers from the Heat, the reserves stepped up big for the Clippers and pushed on to claim their fourth straight win.

The Clippers had six players rise to the challenge and score in double figures and claim the 125-118 win.

The @LAClippers were down 4 starters tonight but ride a total team effort to a DUB over the Heat! #ClipperNation pic.twitter.com/crMFz0XBDP

Down But Not Out

Being down four starters did not phase the Clippers one bit. Patrick Beverley, Paul George, Kawhi Leonard and Nicolas Batum were all ruled out for the game, leaving the Clippers bench to step up big time.

And deliver they did. Marcus Morris Sr. was in the starting lineup for the first time this season and went for a season-high 32 points and six three-pointers. He was not the only one with a season-high though. Center Ivica Zubac (22 points) and guards Amir Coffey (15 points) and Terance Mann (15 points) all produced season highs in scoring for the Clippers.

The Clippers entered the game with a next-man-up mentality, and it seemed to work wonders.

The Heat, however, did not see that kind of production for its reserves. It was the usual suspects for Miami, with Jimmy Butler leading the charge once again. Butler finished with a triple-double, putting up 30 points, 10 rebounds, and 10 assists in 38 minutes. Butler tried a bit of everything to push his team to victory, but Miami still fell short.

Buckets did his part in the first half

Right behind Butler with a double-double of his own was Bam Adebayo. He finished with 27 points and 12 rebounds. Tyler Herro came off the bench to add 27 points of his own.

As a team that typically relies on the three-ball to win games, it was nowhere to be found last night for the Heat. As a whole, the team went just 8-36 and 22% from three-point range. Herro knocked down four of those, while Duncan Robinson added three others.

The Clippers, on the other hand, shot for nearly 47% from three-point range, knocking down 15-32. Morris Sr. and Coffey were on fire from beyond the arc, sinking six and five respectively.

The Heat will continue their road trip against the Golden State Warriors on Thursday at 10 p.m. This will be the only meeting between these two teams during the regular season. Both teams have gone 5-5 over their last 10 games and the Heat are 4-9 in road games.