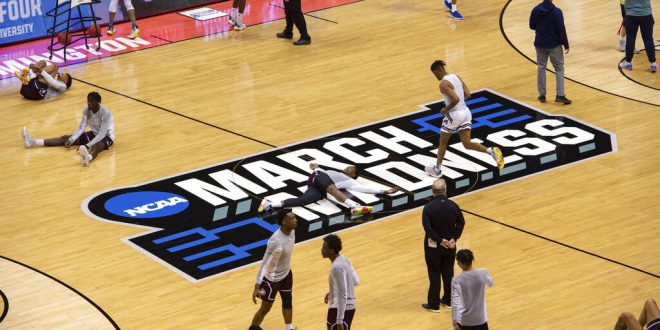 Players warm up on the court before the start of a First Four game between Texas Southern and Mount St. Mary's in the NCAA men's college basketball tournament, Thursday, March 18, 2021, in Bloomington, Ind. (AP Photo/Doug McSchooler)

The NCAA Men’s Basketball Tournament made $900 million in revenue in the 2018-19 season. After the cancellation of the tournament last year, and the conditions players must go through playing during a pandemic you might expect great conditions for unpaid student-athletes.

Maybe, the latest Call of Duty game? Virtual Among us Tournaments? Something to keep players entertained and safe during a pandemic at least. If not those small conveniences, definitely fantastic food from a chef that will keep players motivated and well-nourished. five-star food for world-class athletes helping you make hundreds of millions.

That would make sense but the NCAA apparently doesn’t see it that way.  Players were met with unfulfilled expectations as lunch was an uninspiring boxed lunch. That or fast food the players had to order themselves. A harsh reality compared to the pragmatic expectation of salmon filets. Consequently, the NCAA immediately faced backlash from players on Twitter for the unfair conditions the athletes felt they met.

Think you can definitely be grateful to play this game while also understanding there’s more that should be on the table. Players ISOLATED entire year to help make this tournament happen. NCAA: rewarded w/ $900 million. Players: rewarded w/ free deodorant and small boxed meals. https://t.co/vb9BPGeBkH

Hopefully, it was at least solid deodorant and not the gel deodorant. The Twitter #NotNCAAProperty trended as student-athletes led the charge criticizing the NCAA about a name, likeness, and image. Athletes, fans and reporters came together to share their sentiment.

I find it CRAZY how people who make billions of dollars off of US athletes can tell us whether or not we should get paid for who WE are. Who are you to tell me how and when to make money? But you can make money off of US???? Come on now, that’s just not right‼️ #NotNCAAProperty

I went to college on an academic scholarship

WashU still paid me to run student programming that was deemed vital to the student experience, school culture, and recruiting.

Athletes should be paid too.

Hell they should be paid more because they bring in money https://t.co/jdUSIUNP4q

The NCAA has used the word amateurism to remain one of the most exploitative industries in the entire country. #NotNCAAProperty

It is clear; the players want to play, but at least some of them want reform in the sport and more say on how their names and images are used.

Ethan Sanabria is a second-year telecommunications student on the digital film and television production track at the University of Florida's College of Journalism and Communications. He has previously worked as a broadcaster for the Florida Flight basketball team and currently helps the production of WUFT news facebook lives. You can reach Ethan on any of his social media or at Ethansanabria@ufl.edu.
@ethansanabria
Previous No.1 Florida Gymnastics Enter SEC Championship as Favorites
Next Pat Dooley’s Front Nine: March 19