After a late offer and visit, 6’4″ shooting guard Elijah Kennedy announced via Twitter, he will be attending the University of Florida as a freshman for this upcoming season to play college basketball.

Originally from Virginia Beach, Virginia, Kennedy helped Green Run High School to a shared state title in 2020 and to a state runner-up finish in 2021.  Kennedy and four-star recruit Kowacie Reeves, a 6-foot-7 guard out of Georgia, will be the only incoming freshmen for the Gators in the 2021 class.

An impressive showcase in the Nike Elite Youth Basketball League (EYBL) and being named VHSCA Class 5 State Player of the Year in 2021 helped Kennedy receive interest from Florida.

Speaking to 247Sports Monday, Kennedy mentioned that he was already considering to commit once Gator head coach Mike White offered the opportunity to play for him this season as a freshman.

“Once they offered me I started looking into them. I was already set for 2022, but they wanted me to come this year and after talking with the coaches, my family and taking a visit I decided it would be best for me to go this year,” Kennedy said per 247Sports.

With two players from “The 757” already on the team in the past in Dorian Finney-Smith (Portsmouth) and Keyontae Johnson (Roanoke), the hope is his transition and output will mirror what Johnson and Finney-Smith have done as Gators.

“I felt nothing, but great energy from the coaches which made me feel at ease with attending this year,” Kennedy told ZAGSBLOG.

After losing two starters in the NBA Draft in Tre Mann (18th overall) and Scottie Lewis (56th overall), the Gators will add in the 2021/22 season a quartet of transfers to the program along with Kennedy and Reeves.

It is still too early to project the role Kennedy with play or if he will see much time on the court this season.  However, previously regarded as one of the “purest shooters in the state” according to The Virginian Pilot, expect Kennedy to showcase his stroke from long distance once camp starts.

Too much Elijah Kennedy. Green Run senior has hit 4 3-pointers in the 4th, including this one. Stallions lead Salem 81-66 with less than 3 minutes remaining in Class 5 Region A final pic.twitter.com/DYjCM1wFqV

Previous Pat Dooley’s Back 9 August 2nd
Next All About the Money: Day 1 of NBA Free Agency 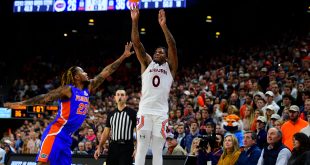