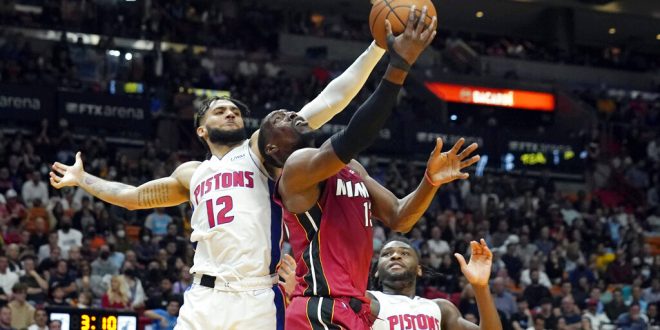 The Miami Heat defeated the Detroit Pistons Tuesday by a score of 105-98. The win pushes their lead in the Eastern Conference up to 2.5 games over the second place Bucks.

These two teams have seen polar opposite results over the season. The Pistons have had a season to forget, winning a mere 18 games thus far. They have already been eliminated from playoff contention and only sit a half game above last place Orlando.

The Heat on the other hand came out of the gates winning and they have not stopped. Miami sits first place in the Eastern Conference with a 2.5 game cushion over Milwaukee. As things stand, the Heat can finish no worse than the play-in games. But with the team still playing strong and a winnable remaining schedule, the Heat holding down the top seed seems quite likely.

To make things harder for Detroit, it was without Cade Cunningham, who was dealing with a non-COVID illness.

Max Strus and the Late-Game Surge

The Heat chose to rest Max Strus and did not list him in their rotation. However, Jimmy Butler suffered a sprained ankle and Strus came in for the second half. With the game still neck and neck, Strus ended up scoring 16 points in the fourth quarter, including 13 in the final three minutes to lead the late rally.

Max came out on FIRE in the 4th and helped us get the W. 16 points all in that quarter. pic.twitter.com/KNUdTk57cc

The Heat scored 37 points during the fourth quarter, more than enough to pull away from the Pistons who hung on all game. It was a much needed resurgence after the Heat only scored 11 in the third quarter, where they missed 14 shots in a row and Detroit saw a 19-0 run.

The Heat’s bench ended up being vital to their success. Strus surged in the fourth quarter, but he was not alone off the bench. Tyler Herro scored 29 points and made five rebounds and four assists. As for the Miami starters, the one who saw the most success was Bam Adebayo, who scored 16 along with eight rebounds and three assists.

20 points for Boy Wonder in the first half.
Happy #TylerTuesday! pic.twitter.com/QbFDMmgN5W

As for the Pistons, they were led offensively by Jerami Grant, who scored 22. Grant also added four rebounds and two steals to his stat line. Isaiah Livers scored 16 for Detroit off the bench with six rebounds.

Miami has now won five of its last seven games and continued holding down the top spot of the Eastern Conference. The next three games for the Heat are a at-home matchup against the Thunder on Friday, on the road against Philadelphia on Monday, followed by a four-game homestand.

For Detroit, it now has lost four in a row. Its next game is Thursday against last place Orlando, followed by Cleveland, Portland and Atlanta.

Jack Shivertaker is a senior at the University of Florida pursuing a degree in Journalism with a focus on sports media.
@JackShivertaker
Previous NCAA Tournament Play Begins
Next Gators Women’s Swim and Dive prep for National Championships