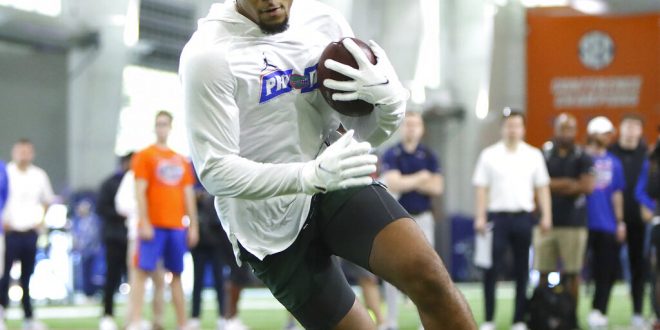 The Tampa, Florida, native wowed general managers, coaches and scouts. He posting an unofficial 4.71 40-yard dash time and a 39.5 inches vertical jump mark. The latter would have been the second-best number for the position behind Iowa State’s Breece Hall, had Davis been invited to the 2022 NFL Combine.

After the showcase, Davis appeared on SportScene with Steve Russell to discuss his performance.

On Jan. 4, Davis decided to forgo another season with the Gators to pursue the NFL Draft. He made the announcement through a heartfelt Twitter post. He thanked Gator Nation for their support. Davis played 46 games in five seasons in the Swamp. In his time, he played under head coaches Jim McElwain and Dan Mullen. Injuries plagued his a big chunk of his Orange and Blue career, however.

He suffered season-ending injuries during his freshman and sophomore years, recording only 10 appearances during that frame. Despite the slow start, Davis recovered and played in 36 of the next 37 games between 2019-21. He totaled 1,470 rushing yards in 284 carries with eight touchdowns.

Davis said he is appreciative of all the highs and lows.

That “next level” of competition is the NFL.

Davis believes UF prepared him for that stage. In addition to patience and perseverance, he learned about tactics, pace and physicality — all essential skills to reach the big leagues. He also emphasized the importance of adapting to new situations.

Davis said he has scheduled meetings with NFL teams ahead of the NFL Draft. The draft will take place April 28-30. He hopes his Pro Day performance was impressive enough to attract scouts.

Other notable players in the showcase included defensive linemen Zachary Carter and Antonio Valentino. Florida Football will be in action for the first time this season during the Orange and Blue game. The game is scheduled for April 14 at 7:30 p.m.