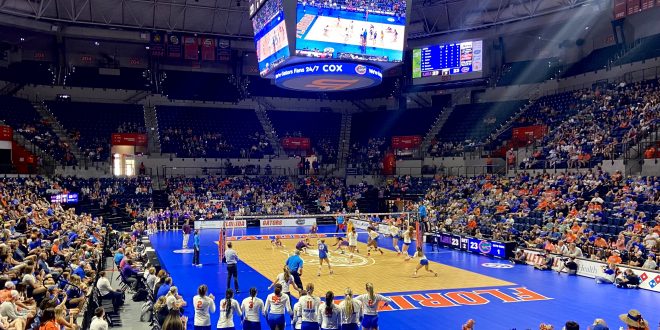 The Florida volleyball team defeated the LSU Tigers in five sets in Sunday’s SEC matchup. The Gators tallied wins for both matches in LSU’s weekend trip to Gainesville.

All Florida in Set One

Beason got the match rolling with three early kills that helped the Gators take a 6-3 lead. Trinity Adams‘ three-point serving streak allowed the Gators to maintain momentum in the first set. An ace from Beason gave the Gators a 10-4 lead and forced a LSU Head Coach Tanya Johnson to call a timeout.

The Gators continued to extend their lead thanks to strong defensive play and stellar attacking. Stucky effectively utilized the slide with both Essix and Kelley. An LSU attack error allowed Florida to pull out the 25-18 set one victory.

Gators Too Much for LSU

The start of the second set was plagued with attack errors from both squads. Josie Vondran‘s kill allowed LSU to take a 9-6 lead and force Florida Head Coach Mary Wise to call a timeout. LSU continued to build on their lead thanks to a three-point serving streak from Maddie Waak.

Despite being down 18-12, the Gators did not back down. Florida capitalized on two attack errors, and Essix delivered a kill to inch the Gators within three points of the Tigers. The scoring did not stop there as Marina Markova executed three kills to put the Gators up 19-18.

The Gators held onto the momentum as they defeated LSU 26-24 in set two.

Florida got off to a hot start taking a 5-0 lead in the third set. LSU rallied to tie the set at eight points apiece. The Tigers couldn’t stop Beason as she delivered kills from all over the court, including the back row.

Set three went down to the wire with Florida rallying after being down 23-20. The Gators tied the set at 24 points apiece thanks to an overpass kill from Sofia Victoria. However, it wouldn’t be enough as the Tigers pulled out a 27-25 win in set three.

LSU took an early lead in set four, but the Gators rallied to make it a two-point game. The Tigers took over and extended their lead 20-12. Kills from Markova and Essix forced an LSU timeout with the Gators down 21-16.

The Tigers finished on a strong note securing a 25-21 win to send the match to a fifth set.

A block from Nnedi Okammor and Beason, as well as a kill from Victoria, gave the Gators a 4-2 advantage at the start of the fifth set. The Gators continued to tally points and took an 8-4 lead thanks to an ace from Beason.

The Florida block was a force to be reckoned with and helped the Gators take a 13-9 lead. The Tigers called a timeout, but it wouldn’t be enough to stop the Gators. Florida secured the match with a tough 15-13 set five victory.

The Gators travel to Mississippi State to take on the Bulldogs for a two-game series October 14-15. First serve on Friday is slated for 9 p.m. on SEC Network.