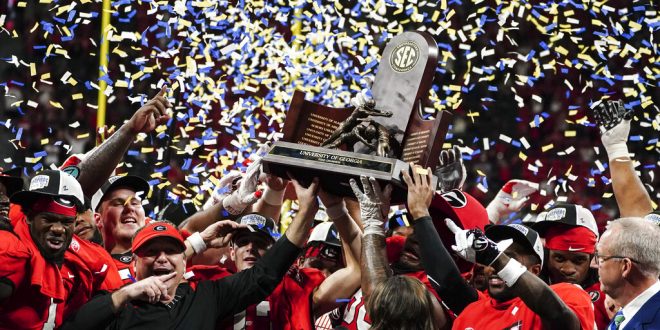 Georgia left no money on the table after their dominant performance against the Tigers. Quarterback and Heisman Trophy candidate Stetson Bennett threw a season-high four touchdown passes. He threw for 274 yards while completing 23 of his 29 passes. However, it wasn’t just the offense that played a major role for the Bulldogs. Both special teams and defense had impactful plays that helped keep the momentum in Georgia’s favor.

In the first quarter, safety Christopher Smith had a fantastic heads-up play on a blocked field goal. Smith waited until the Tigers thought the play was dead and returned the blocked kick for a 96 -yard touchdown.

Then on defense, Georgia had things go in their favor when a deflected pass bounced off an LSU receiver helmet, which was intercepted by the Bulldogs. This would eventually lead to a score for Georgia, extending their lead into the half.

Coming out of the half, the Bulldogs led 35-15, and this lead would remain the same as the game went on, eventually ending 50-30.

Coming into the game, Georgia was the only team in the College Football Playoff conversation. With three losses in the regular season, there was no chance for LSU to get in to the playoff. With a loss, Georgia could’ve fallen to the two or three spot depending on the other conference championship outcomes. Instead, they easily secured the top spot in the playoff, setting up a matchup with the Ohio State Buckeyes in the Chick-Fil-A Peach Bowl on Dec. 31.

In the second playoff game, Michigan will face off against TCU in the Vrbo Fiesta Bowl on Dec. 31. Georgia is now two wins away from being the first team to repeat as National Champions since Alabama’s 2011-2012 season.