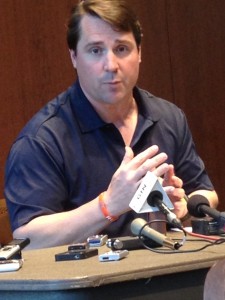 The word of the day was “injuries” in Florida football Coach Will Muschamp’s Tuesday press conference. The lines of scrimmage are positions hit the most with injuries. Defensive lineman Jonathan Bullard and offensive lineman Tripp Thurman are both playing hurt.

The Offensive line is the most banged up unit on the team, and Muschamp talked about the MASH unit at the position unit. Among hampered offensive lineman are Max Garcia, who has recently returned from a back injury, and John Halapio who has a knee injury, among other players playing hurt.

Because of all the injuries Florida is down to six healthy offensive lineman and will have to change the way they scrimmage Saturday as well as at the Orange and Blue debut April 6th. There will be less of an emphasis on running plays in-game situations because of the load it would put on the few offensive lineman the Gators have available. So instead, both scrimmages may look like a regular practice.

Other injuries include linebacker Neiron Ball and safety Cody Riggs:

Mack Brown and Kelvin Taylor are both Running backs that have performed well behind starter Matt Jones.

Taylor –an early enrollee– made impressive plays in Saturday’s scrimmage, but Muschamp says he still has things to work on in the mental aspect of the game.

Loucheiz Purifoy has returned to a predominately defensive role, but is still getting reps on offense.

The defensive secondary is a unit that Muschamp said needs a lot more work. The group gave up costly plays in Saturday’s scrimmage.

Outside of the team’s injuries and work on the field, Muschamp took time to congratulate the Florida Men’s basketball team for advancing to the sweet 16, and heaped praise on head coach Billy Donovan.