Kurt Roper Pleased With The Offense; Hopes To Have Decision On Back-up QB Soon 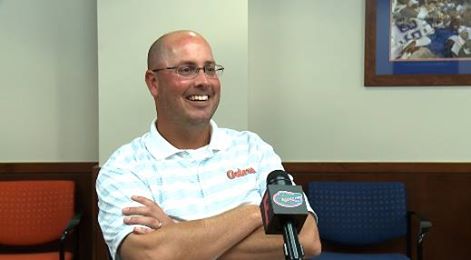 The Gator football team is in the final days of preseason camp and the great news is the coaching staff is getting close to making a decision on a back-up to starting quarterback Jeff Driskel. Offensive coordinator Kurt Roper talked following Tuesday’s practice to discuss Florida’s new and much improved up-tempo offense.

“It’s fun to watch,” Roper said. “I think those two guys are talented individuals, I think they’re good people, so they understand how to compete and still be a good teammate. And that’s not easy to do, but I enjoy being around them.”

“Obviously it’s getting close to decision time, but it’s a fluid thing because you never know what can happen,” Roper added. “So we have to start focusing in on who is going to spend the time getting the two reps as much as possible.”

Roper added that this is one of the most critical decisions the coaches and staff will make because the Gators need to have their very best quarterback on the field in the event Driskel goes down. He emphasized how important it is to be prepared for the worst case scenario, especially considering the season-ending injury Driskel suffered last fall.

“Well, I think the first thought process is if Jeff goes down, you’ve got to be prepared to go win that game when it happens,” he added. “That’s really where the decision starts and why it never stops and can always be fluid.”

Roper, who formerly served as Duke’s offensive coordinator, assistant head coach, and quarterbacks coach and led the Blue Devils to a record-setting season in 2013, added that he would not be opposed to using two quarterbacks, if needed.

“I have in the past. I think the biggest thing is to have a guy, a second quarterback, that can go play the game if something happens to the first one. But in the past, at Duke we had a guy that was capable,” Roper said. “You know really where it all started Sean Winfrey became our starting quarterback at Duke. Sean was obviously a heck of a quarterback; he’s with the Falcons right now. But his skill wasn’t running the football. It wasn’t going to be zone read or quarterback powers or any of that, it wasn’t really his skill.”

“So we felt like those were good situations to bring in Brandon Connette at that time to get our numbers right in certain situations and run the football,” he added. “So we felt like it was a package that we needed in low red, short yardage, that type stuff. And so it’s just growing from there but it really got down to just taking advantage of strengths if that makes sense. So we’ll use two if they earn the right but really it gets into how does it help us win.”

Meanwhile, Roper elaborated on the progress the squad has made on the offensive side of the ball and how impressive the Gators have looked throughout fall training camp. He said a lot of that productivity stems from the team’s confidence – a result of the development of Roper’s new fast-paced shot-gun spread offense and how well the players have adjusted to all the changes.  According to Roper, one guy who seems to be much more confident and comfortable in the offensive scheme is his starting quarterback.

“And if he will buy into that and believe that – now you have a mentally tough guy that can go and win a lot games.”

You can catch the Gators in action at the squad’s season opener against Idaho on Saturday, August 30th at Ben Hill Griffin Stadium.

Roper on Grier and Harris

Roper on Possibility of using 2 QB’s