Senior track athlete Marquis Dendy is entering the final season of his decorated career at the University of Florida. Before he became a two time national champion, he was state champion in Delaware where he still holds records for long jump and triple jump.

Coming out of high school he was the number one long/ triple jumper in the nation and he knew that he wanted to come south for track because of the weather.

“It’s really cold up north and I knew I didn’t want to be in any school up north or in the cold area,” says Dendy.

For him being in the south was important for training.

“I remember training in snow and when its freezing up there and putting on all those layers, just wasn’t good.”

Dendy’s inspiration for jumping and his success can be tied back to his family, specifically his aunt.

“My aunt was in the Olympics, she ran as the alternate for the 4×400 alongside some of the greats,” Marquis says. “Having track in my family gene pool made it something I wanted to pursue.”

Dendy is coming off a remarkable season where he was named SEC Men’s Field Athlete of the Year and won the NCAA championship for the long jump, while setting both school and NCAA records, not to mention setting a world leading mark for the year. However, he doesn’t feel as much pressure coming into this season.

“Not any different pressure than it was years before that, every year to me is pressure but I mean I’m really used to it and confident in my ability,” Dendy said.

Dendy credits outdoor champion and UF alumni Omar Craddock as his mentor over his time here, saying Craddock has “always been around me helping me here and there.” 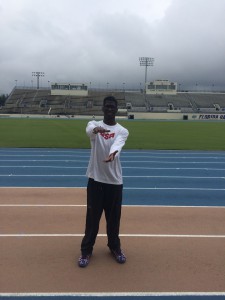 Entering his final season Marquis Dendy will look to defend his national championship titles in both indoor and outdoor long jump with another tremendous season.

Im a senior at the University of Florida currently pursuing a degree in Telecommunications. I work for ESPN Gainesville 95.3 and anchor the Monday sports broadcast for WUFT First At Five. Im from New York and an avid sports fan of all New York teams.
Previous Gator Football Suspends Treon Harris
Next Tuesday Sports Update (10/7)