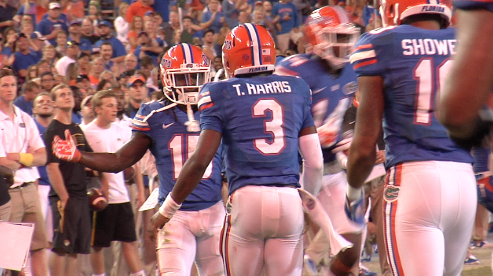 Florida football coach Will Muschamp has named Treon Harris the starter at quarterback for next weekend’s matchup against SEC rival Georgia. “We’ve got an open week where he is getting a bunch of reps. Right

now we felt like that was the best move moving forward,” Muschamp said today on the SEC Teleconference. In last Saturday’s heartbreaking 42-13 loss at home against Missouri, Harris led the Gators on both of their scoring drives to help UF prevent its first shutout since 1988. The true freshman from Booker T. Washington is 12-of-18 for 263 yards, three touchdowns and one interception, and according to Muschamp has proved that he can make a difference for the Gators. “Treon, you saw what he did late in the game,” Muschamp said. “He has a knack for making plays and making good things happen for our football team. We’ve struggled with production at the quarterback position and that’s been an issue for us.” Harris replaces fourth-year junior Jeff Driskel who has continuously struggled; compiling 12 turnovers in the last four games. However, Muschamp added that Driskel will still see playing time. “Treon is getting all the reps right now, and Jeff is certainly going to have a role in the game,” he emphasized. “Jeff’s a guy that’s an experienced player for us. We’ll continue to move forward with Jeff playing a role on our football team as quarterback, and what that role will be we’ll see moving forward.” But for now, Muschamp’s number one priority is to help the Florida football program get back on on track and win games. “We need to win games, that’s the bottom line. We look forward to our preparation this week – as well as next week and get ready to take on Georgia.” Harris will have a bye week to help prepare for his debut as Florida’s starter before facing the 9th ranked Georgia Bulldogs (6-1, 4-1 SEC) on November 1st in Jacksonville. To hear audio from Muschamp’s on the SEC Teleconference, please click below: Muschamp on Harris starting Harris will start for Fl vs Georgia Muschamp on team needing to win games