When asked post-game about playing on the injured foot, Bortles simply shrugged.

The Jaguar defense improved after that, forcing punts on the next three possessions.

The Jaguars then cut into the lead, moving 80 yards on 11 plays in 3:15. The drive to close out the first half included Bortles completing six of eight passes for 51 yards, capping it with a four-yard touchdown pass into the left side of the end zone to tight end Marcedes Lewis.

Jaguars head coach Gus Bradley talked post-game about the importance of the drive in regards to momentum in the game.

“That was really big to have that 11 play drive right before the half and that helped the momentum in the locker room,” Bradley said. “I said [in the locker room], we don’t really need to change anything, we just need to continue to keep our poise and good things will come.'”

Running back Toby Gerhart rushed three times for 24 yards on the drive, and the half ended with the Titans leading 10-7.

Gerhart’s night was far from over as his one yard touchdown run gave the Jaguars a 14-10 lead with 9:27 remaining in the third quarter, putting the Jags ahead for good.

Gerhart left the game with a rib contusion early in the fourth quarter and did not return.

With Gerhart out, Jordan Todman broke out for a 62 yard touchdown run with 9:13 remaining to give the Jaguars a 21-10 lead.

The Titans pulled to within eight with 6:06 remaining on a 23-yard field goal by Ryan Succop, but the Jaguars took nearly five minutes off the clock on the ensuing drive that left the Titans with the ball.

A sack by defensive tackle Sen’Derrick Marks on the game’s final play ended the Titans’ comeback hopes– and triggered a $600,000 bonus in Marks’ contract when he surpassed eight sacks for the season.

Overall, Bradley was pleased with his young team’s performance, but especially the poise of his young quarterback performing on a big stage.

“He really put the team on his back and made sure we got some points on the board,, Bradley said.

Bortles completed 13 of 26 passes for 115 yards and a touchdown with no interceptions. Bortles added 50 yards rushing on five carries, while Gerhart rushed 12 times for 53 yards. Marqise Lee caught four passes for 65 yards.

Titans quarterback Charlie Whitehurst completed 24 of 35 passes for 287 yards and a touchdown with no interceptions.

Jacksonville now has nine days to prepare for the Houston Texans, as they head to Reliant Stadium on December 28th to close their season.

For post-game comments from Coach Bradley and Bortles, click below:

Bradley on the team’s perfomance in the second half

Bradley on getting momentum in the game

Bradley on the atmosphere of the game (national audience)

Bortles on the team responding in the second half

Bortles on the message he hoped to send by playing hurt 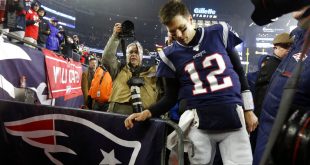