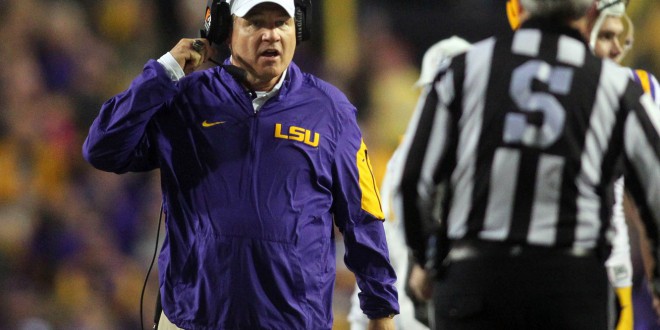 SEC Preview: LSU Looks to Snap Losing Streak on the Road against the Rebels

The 15th ranked LSU Tigers (7-2) were College Football Playoff contenders just two short weeks ago, but after consecutive losses have eliminated the team from contention in the SEC West, they are now simply looking to get back on a winning track. In fact, some believe that if the team fails to win this Saturday, Tigers Head Coach Les Miles’ job might be in jeopardy.

When Miles was asked if he feels any added pressure heading into the game against Ole Miss, he responded by saying it won’t be any different than the pressure he’s felt previously. Miles also pointed out that although the LSU head coaching position is on where winning is a job requirement, he still feels the supported by the program’s athletic director after consecutive losses.

The 22nd ranked Ole Miss Rebels (7-3), who are coming off a BYE week, are also coming off of a loss their last time out to the same opponent that handed LSU its last defeat, the Arkansas Razorbacks.

Ole Miss Head Coach Hugh Freeze knows that both teams are looking to bounce back, making the match-up an important one.

Freeze also admitted that although his team has had 2 weeks to prepare solely for LSU, having a BYE week so late into the season has been a challenge.

A key match-up this Saturday will be how LSU’s defense performs against Ole Miss Quarterback Chad Kelly, who threw for three touchdowns and ran for another three in the loss to Arkansas. Kelly had an outstanding 478 total yards in the game.

LSU Heisman-candidate running back Leonard Fournette had a quiet game by his admittedly lofty standards last week against Arkansas, rushing for 91 yards and a touchdown. If the Tigers fall behind again this Saturday, sophomore quarterback Brandon Harris will have to throw the ball more than the team would prefer. Harris threw a season-high 35 times in the loss last week for 271 yards.

The game between the LSU Tigers and the Ole Miss Rebels will take place from Vaught-Hemingway Stadium in Oxford Mississippi.