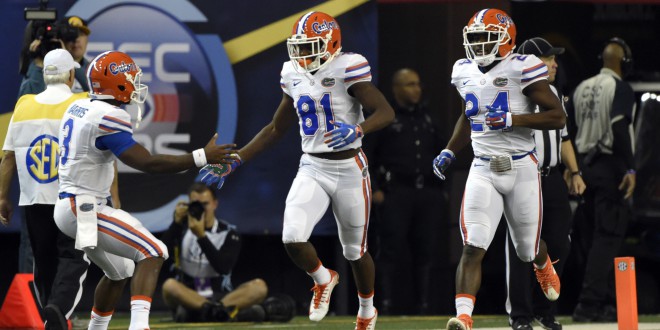 The new year brings a bowl game for the Gators as they prepare to take on the Michigan Wolverines on January 1st. Both coaches have striking similarities in their inaugural seasons. Florida head coach Jim McElwain turned around the Gators’ record to 10-3, making an SEC Championship appearance for the first time in six years and becoming UF’s first coach to win 10 games in his first season. He says he’s grateful for the opportunity to play in this bowl game.

Michigan’s head coach Jim Harbaugh also came in clutch during his first season with his alma mater. The Wolverines ended with a 9-3 record, which is four more wins than last year.

McElwain says he has much respect for the impressive work Harbaugh has done this season.

Much like Florida, Michigan’s defense proved to be the glue of the team, with former Gator defensive coordinator D.J. Durkin leading the pack. However with Durkin leaving to be Maryland’s new head coach, Harbaugh said that assistant Greg Mattison, who also worked for the Gators as an assistant under Urban Meyer, will take over as DC for the bowl game.

Although the two coaches have never met in a game before, McElwain does have history working with Michigan’s offensive coordinator Tim Drevno. The two worked in the ’90s at Montana State.

As far as college playoff rankings go, the Gators came in at 19th Sunday night, after their loss to Alabama in the SEC Championship game. The Wolverines are just a few spots ahead at number 14.

The Buffalo Wild Wings Citrus Bowl will kick off at 1:00 pm in Orlando on New Years Day.