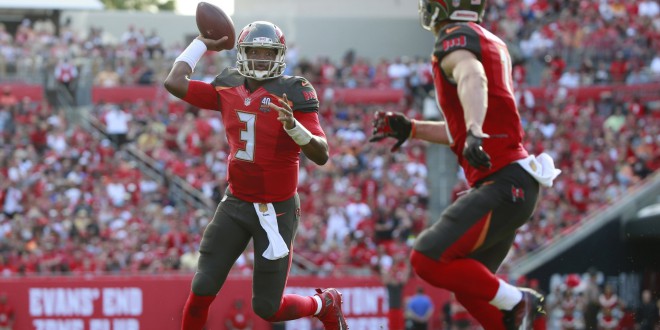 As week 15 of the NFL season kicks off tonight from the Edward Jones Dome in St. Louis, the Tampa Bay Buccaneers (6-7) are still alive in the NFC playoff picture.

Even though the Buccaneers are chasing both the Seattle Seahawks and the Minnesota Vikings with only three games left in the season, Tampa Bay receiver Mike Evans is looking for his team to finish strong and hopefully reach the playoffs for the first time since 2007.A loss to the Rams coupled with wins by both Minnesota and Seattle would eliminate the Buccaneers from playoff contention.

Undoubtedly, a highlight for the Buccaneers this season has been the play of rookie quarterback Jameis Winston. Winston leads all rookies with 3,059 passing yards, to go along with 18 touchdown passes.

Although Winston is no stranger to playing in nationally televised games because of his storied college career at Florida State, Thursday Night will mark the first time Winston is in a prime time match-up as an NFL quarterback. For Winston, this simply means an opportunity for the rest of the country to see how talented this current rendition of the Bucs can be.

Hoping to contain Winston and the rest of that talented offense will be the Head Coach of the St. Louis Rams Jeff Fisher. The Rams (5-8), who are still also mathematically alive in the NFC playoff race, are holding opposing teams to 238.4 passing yards per game

The biggest concern for St. Louis this season, however, has been simply scoring points. Only the San Francisco 49ers have a statistically worse offense this season, with the 31st ranked Rams averaging a mere 173.1 passing yards per game.

The Rams will in all likelihood look to rely on the 6th best running offense in the league, led by rookie running back Todd Gurley. Gurley rushed for 140 yards and two touchdowns on 16 carries in Sunday’s win over Detroit. New offensive coordinator Rob Boras will look to build on the 203 rushing yards the team totaled during their win, which was a season-high.

Kickoff for the matchup is scheduled for 8:25 p.m.

Coverage of the game can be seen on the NFL Network.

@RickyRemis
Previous Gator’s Take a Week Off the Hardwood to Hit the Books.
Next Gators Men’s Hoops Looks to Bounce Back vs Okie State