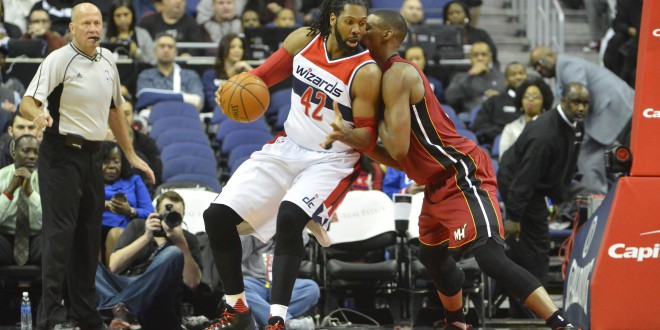 The Miami Heat fell to the Washington Wizards on Wednesday night at the Verizon Center, 106-87.

Washington never trailed and had six players in double figures. John Wall and Bradley Beal led the way with 18 points apiece, Nene had 16, and Marcin Gorat had 15 with 12 rebounds.

Despite missing the second half of last season with blood clots on his lung, Chris Bosh is the only Miami player to play in each of his team’s 43 games. Bosh had a strong first half against the Wizards, stopping Wall on multiple occasions. The 31-year-old had 18 points, grabbed four rebounds and dished two assists on Wednesday night.

Heat star Dwayne Wade was scratched from the game against the Wizards with shoulder soreness. Miami declared him out about a half-hour from tipoff.

Miami began the game with 10 healthy players and ended with eight.

Halfway through the second quarter, Miami’s starting center Hassan Whiteside fell to the floor with a strained left oblique and didn’t return to the game. With 2:25 remaining in the game, Luol Deng, who had 16 points and eight rebounds,  left the court with a towel covering his face after being poked in his right eye.

Without Whiteside’s rim protection, the Wizards were able to take the lead by 20 points in the fourth quarter. The Wizards turned the Heat over 21 times and had nine steals in the first half.

Bosh said it’s tough to deal with so many players out due to injuries, and it didn’t help when Whiteside went down in Wednesday nights game.

Spo on the team's health status leading into Friday's game vs Toronto – "Everybody will be reevaluated tomorrow."

The Miami Heat will take on the Toronto Raptors tomorrow at 8:00 p.m.