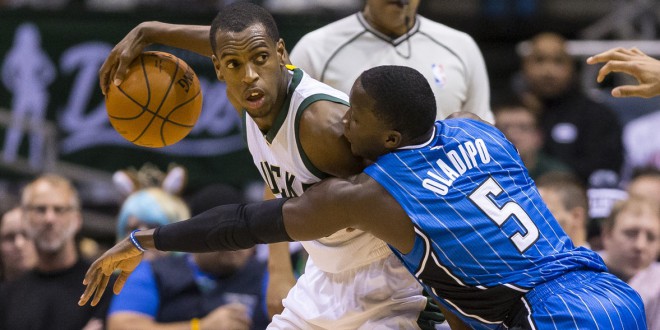 The Milwaukee Bucks earned a home victory over the Orlando Magic Tuesday night in the BMO Harris Bradley Center with a 107-100 victory.

Orlando has now lost 11 of 12 games since New Year’s Day, sliding out of the Eastern Conference playoff race.

The Magic shot 54 percent from deep while the Bucks hit only five threes the entire night, two of them coming from Jerryd Bayless.  Orlando head coach Scott Skiles says his team made 13 of 24 three’s, but they are settling too much on perimeter shooting.

Things did not start out well for the Bucks as they let the Magic pull ahead to a 30-23 lead after the first quarter. The quarter featured four Orlando 3 point baskets and eight points from former Buck Tobias Harris.

Things were looking better for Milwaukee in the second, but Victor Oladipo’s three pointer gave the Magic their biggest lead, 48-32, with 5:35 left in the second quarter. Orlando led the way 56-53 at the half.

In the third, the Bucks made a comeback after multiple Magic turnovers and in the fourth quarter, the two teams battled it out and the Bucks found themselves falling behind by three with just under three minutes remaining.

Bucks forward Giannis Antetokounmpo scored 25 points with eight dunks and nine rebounds. Bayless helped his team clinch the win with his 3-pointers in the final two minutes, including a baseline shot with 13 seconds left in the fourth.

Orlando’s Victor Oladipo scored 18 points and gathered a team-high five assists and Nikola Vucevic added 16 for the Magic, but it wasn’t enough as the Bucks finished the match up with a 62-26 advantage in paint points.

The Magic will try to get back on the right track when they take on Boston Friday night.